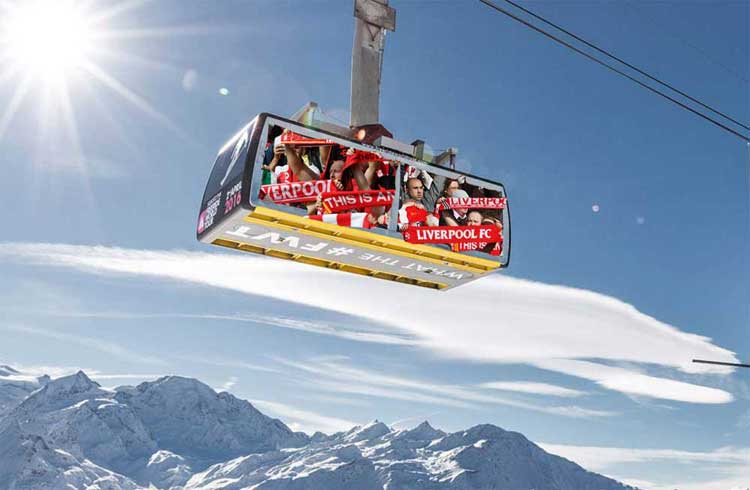 Yep, you'll never ski alone in Verbier - or, at least, without the Anfield chant ringing in your ears. For the next four years the Swiss resort has collaborated with Liverpool FC in order to communicate winter and summer holiday offers, as well as information about the region putting the Swiss ski resort on the map for LFC fans.

Billy Hogan, Managing Director and Chief Commercial Officer, Liverpool FC, said: 'As our first Alpine destination partner, we are delighted to welcome Verbier to the LFC family. The resort shares many of our club's values including passion and excellence, and we look forward to working closely with them to provide exciting opportunities for our fans.'

The resort will be made known to Liverpool FC supporters through various targeted actions, such as animations in and around the stadium and e-marketing with special offers on a stay in Verbier.

Laurent Vaucher, CEO of Téléverbier, said:  'It is important to distinguish between sponsorship and commercial partnership. Our operation aims to make our station known and to entice LFC fans through new experiences.'

The highlight of the season will be the organisation, in January, of an operation called Liverpool Week, during which animations for all the hosts of the station will be organised in Verbier in connection with the Anfield club.

'The UK market accounts for approximately 28 percent of Verbier's overnight stays over the winter season. It is therefore of strategic importance and we hope that this collaboration will help defend or even increase our market share in the UK but also in Europe,' says Pierre-André Gremaud, Managing Director of Verbier Promotion.

Launching the partnership, Liverpool FC Legend, Robbie Fowler, took to the slopes to show off his skiing skills in a short video clip. However, as the video cuts to the end, fans realise he only spent an afternoon on an artificial ski slope.