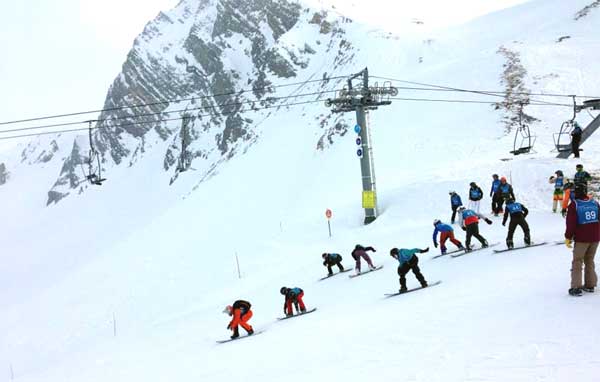 How did our Neil the Seasonaire, who jumped off the fast track of City life, find himself hurtling down at high speed in the local Courchevel derby?

The fast realisation on the dawn of a clear crisp day that in a few hours time my adrenaline will be peaking on the start line, surrounded by other hungry beasts ready to leap up and slide down the Roc Merlet Derby course is something to treasure - and one of the single greatest events of the season so far.

Just days earlier, my neighbours had mentioned this amateur event and, still struggling to shed the excitement and competition which is born of the city life I left behind, I see it as foolish not to enter.

It was from the highest point in Courchevel, 7.5k down to what we hoped would be a triumphant finish line in 1650m. 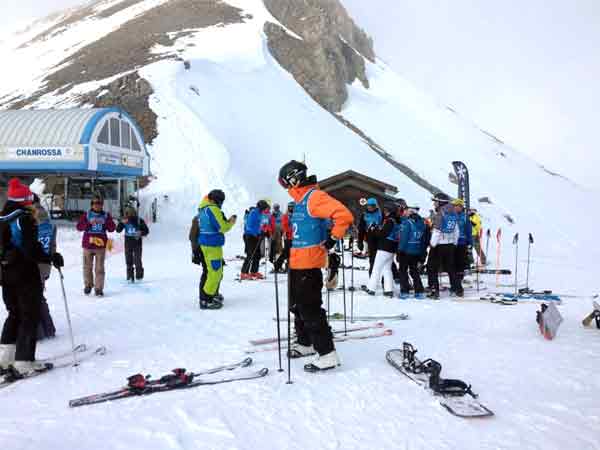 The instructions, all in French, are understood by a few

Our boards had been fully waxed up, edges sharpened within an inch of the ice, able even to slice the cucumber that had been filling our two euro per day budget sandwiches which, seemingly, sustain our weeks (a big change from the long luxurious lunches which occupy those annual holidays or even the delicious sushi of an Itsu lunch).

So with a heart beat, which I'm sure Mo Farah would be proud of before an Olympic victory, we are ready to roll.

The instructions, all in French, are understood by a few, not including me. Thankfully our new friend and interpreter 'Colin' advises of a deep bomb hole and a new chicane added by the course marshal to slow everyone down - and the mandatory 'Ready - Steady - Go'. With a cup full of anticipation and a hip flask of excitement, I kneel on the start line and wait for my order to go. Then wallop! To cheers of 'allez allez' we are off .

An ocean of fun and good humour

The fast realisation that the mug of excitement is far larger than my thimble of talent compared to the field is a harsh one and a fall at the first turn translates my dreams of victory into the reality of chasing one of my very friendly neighbours down the remaining 7k to the finish line, appropriately in the childrens' play area of 1650.

My finishing place, slightly lower down the order than expected, is a drop of disappointment in an ocean of fun and good humour, with the entire contingent rallying behind every competitor as they cross the line. This included another (and I should say, very tenacious and talented) neighbour of ours, Melanie, who picks up an award for the slowest time of the day (representative only of her wonderful character and desire to give anything a go), and two hours free ski lessons from the local ski school. Big shout goes out to the organising ESF and the securite de piste, all of whom volunteered their time for this amazing event. If you are ever in the area, I highly recommend you check it out. 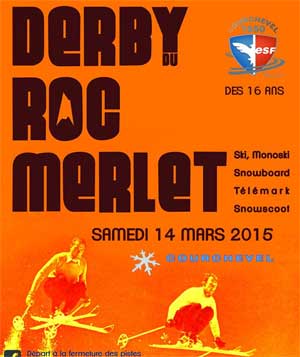 My expectation is far higher than my ability

Apart from entering races where my expectation is far higher than my ability (but, hey, what are dreams and flags made of?) I now have a friend who holds knowledge that I hope will benefit us all. Mr Michael Muscles who, as his name suggests, requires a high protein diet and, fortuitously for us, means he has been sampling the 3 Valleys' finest burgers.

Muscles can categorically tell us who is best. The Guardian newspaper would have you believe it is the very fine 'Mountain Burger' (by the Spar supermarket) in Meribel-Mottaret. This is, without doubt, a damn good eat but, in our opinion, comes in second to the amazing 'La Popote 83' in Couchevel 1850 on Place du Rocher, a street food cabin started by two very well-travelled girls passionate about food. If you want the best, get yourself down there. Delicious beef patties, crispy onion things, oozing with runny melted cheese and sumptuous sauces, these girls have got it nailed - and for unde

So with a full belly and the fantasy of a race victory behind me, what's next? Well, as most seasonaires will know, it was inevitable injury and the misery that comes from the darkness of nothing, only slightly marred by the fact it hasn't snowed in weeks and the brown marks running down the pistes are starting to look like a spilled chocolate milkshake. Does it mean a premature end to the season? It's certainly put pay to the dreams of more 'no friends' blue sky powder days, this season.