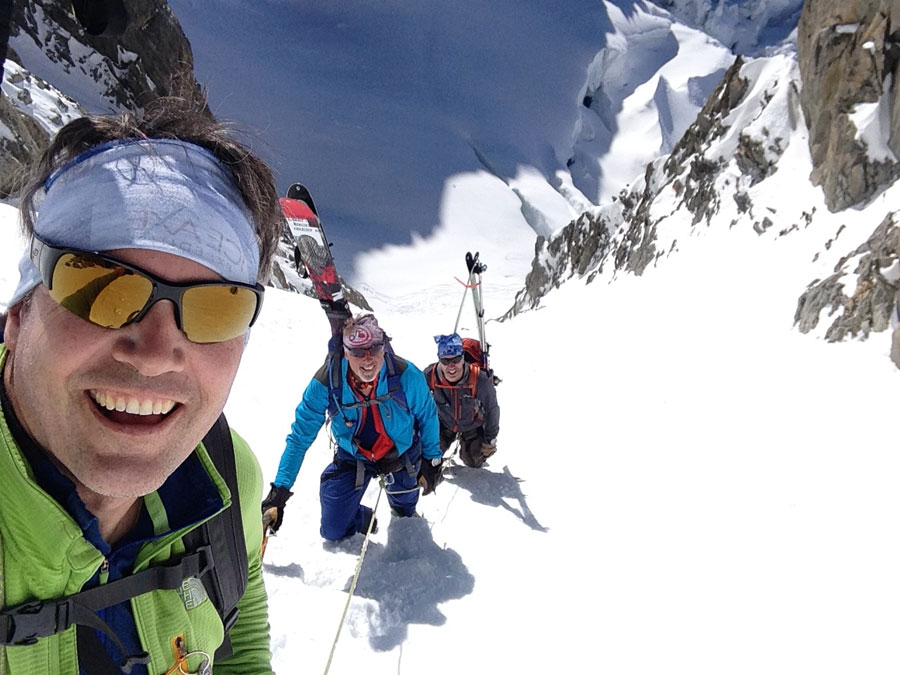 A LITTLE BIT DIFFERENT TO MY USUAL SKI TOURING ESCAPADES

Maybe it's because I first visited La Grave way back 20 years ago in 1997, and pretty well returned there each year that I never ended up skiing with a Mountain Guide in Chamonix.

I'd heard horror stories of how busy it can be, with huge numbers of people fighting to get on the lifts and loud mouthed weekend warriors and the like along with other stories of the long queues of people descending the Aiguille du Midi to ski the Vallee Blanche with Mountain Guides treating their clients like something that was on the bottom of their shoe after walking the pavements of Chamonix. All this sort of made me appreciate how fortunate I was to be based in quiet little Serre Chevalier just over the Col from La Grave.

So finally there was an opportunity to experience Chamonix with a good friend that I've been skiing with for a long time and have done numerous road trips with along with a highly respected Mountaineer and Guide, Kristoffer Erickson.

My friend Tim and Kris together have done a lot of climbing and I sort of had an inkling that just maybe I was in for a little more than the type of ski touring that I'm more used to. For sure in the past I've been rappelled down routes in La Grave but I was pretty convinced that I was going to be exposed to a lot more than that!

Things did not start well, I'd left my wife (Elaine) in Morzine where I'd driven up to the day before. However, it wasn't the wife that I'd left behind that was the problem, it was my ski boots that I'd left in the chalet as I did not want to leave them overnight in the van!

Luckily Tim had a spare pair of boots, that just about were a good fit, though not ideal.

I'd left Morzine early to be there to sort things out, and we met up with Kris at the Flégère lift.

We took a few lifts up and after a drag did a long traverse to the start of the skin towards the Col de Beugeant.

Have to say I was quite shell shocked at the number of groups and people ahead of us but it was a Sunday. There must have been a good 40 or so.

Once we reached the final part, it was skis on the pack and crampons on roped together for a little climb to the Col. 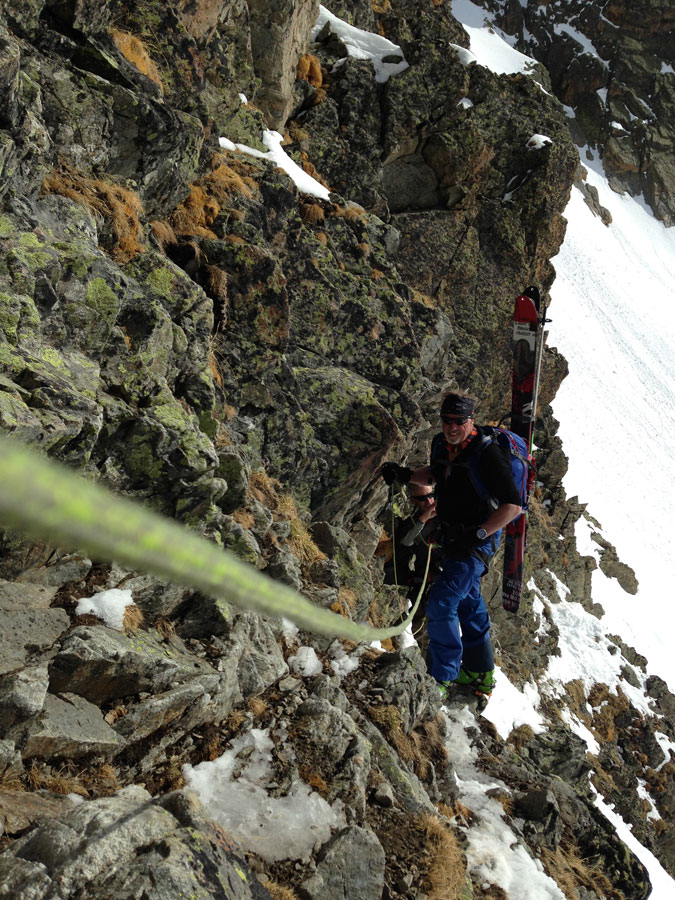 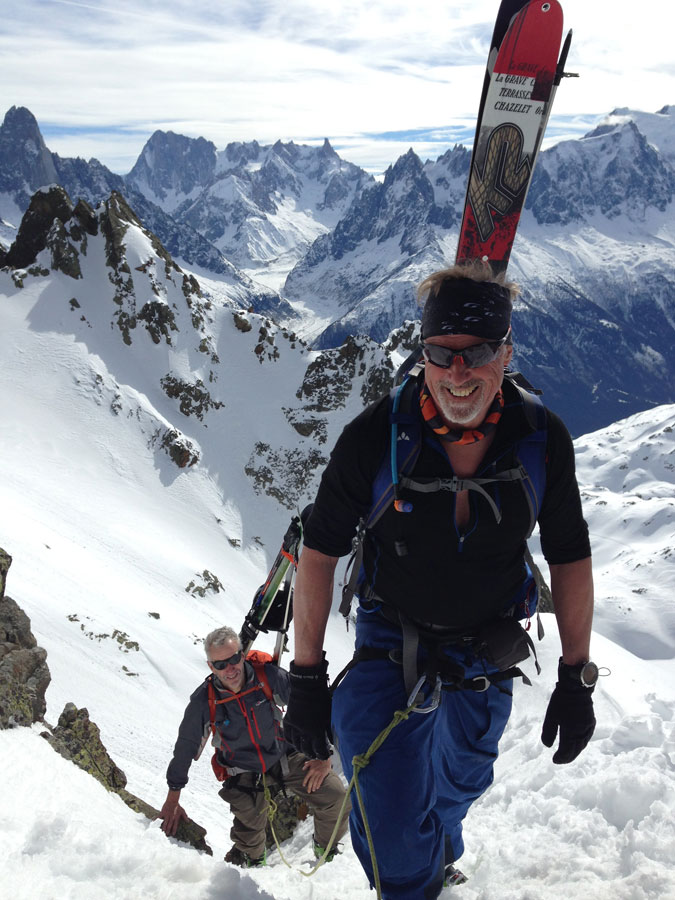 Then it was short and easy rappel down to put our skis on, and we soon were ripping some very nice powder. 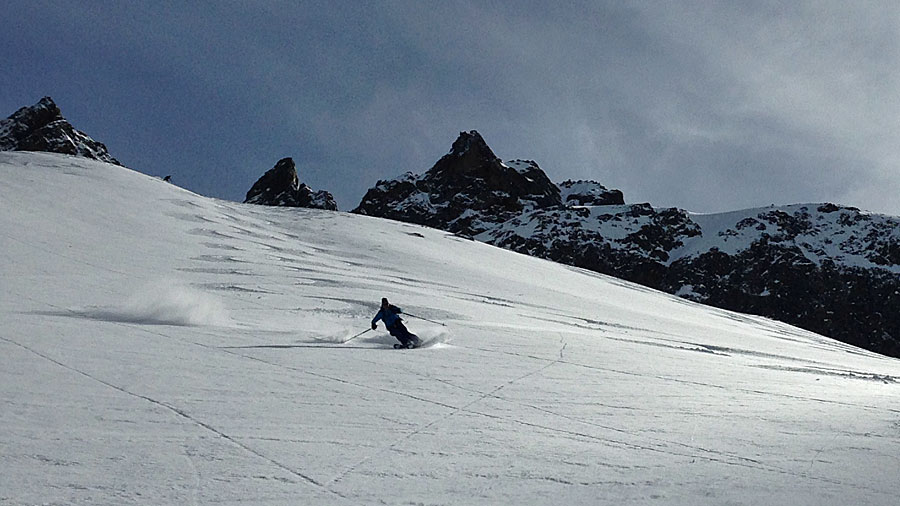 The powder might have been sweet but the run out in the valley was not ideal for me with boots that by then were killing me and being on 115 wide skis, but, hey ho, live to fight another day. 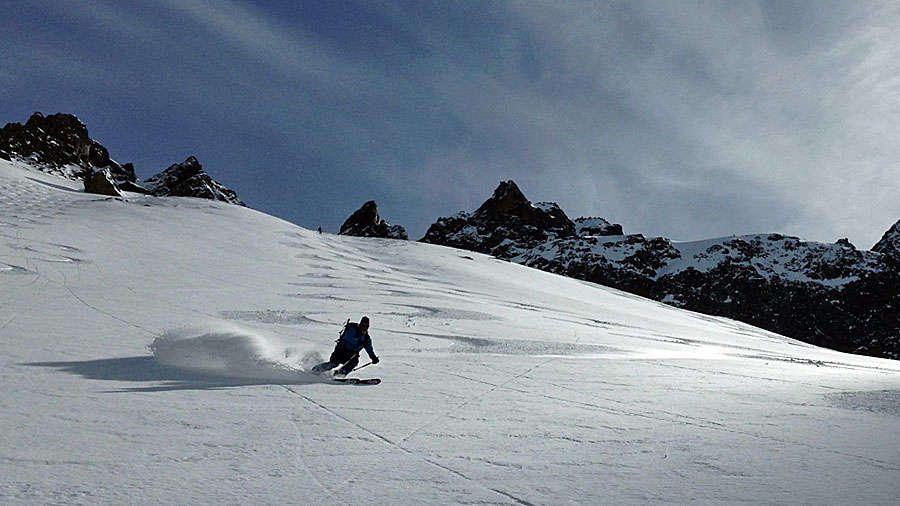 I did think that we were going to have a reasonably sensible night and Kris suggested that might be a good option as he had a big day planned for the next day. However, watching Italy give England a close call in the rugby ensured a fair few beers were downed and then more drink with dinner meant we were both feeling a tad shabby in the morning.

We met at 08:15 at the Aiguille du Midi cable car and joined the many people who were already there. Once we were at the very top I did do the tourist thing and look around blown away by the stunning scenery. Then it was on with the crampons and roped up to descend down to where we were to put the skis on.

There were so many groups of skiers taking the less steep route down to ski the Vallee Blanche. Kris guided us down the steep path and we looked back up to see just how many were trying to make their way down. 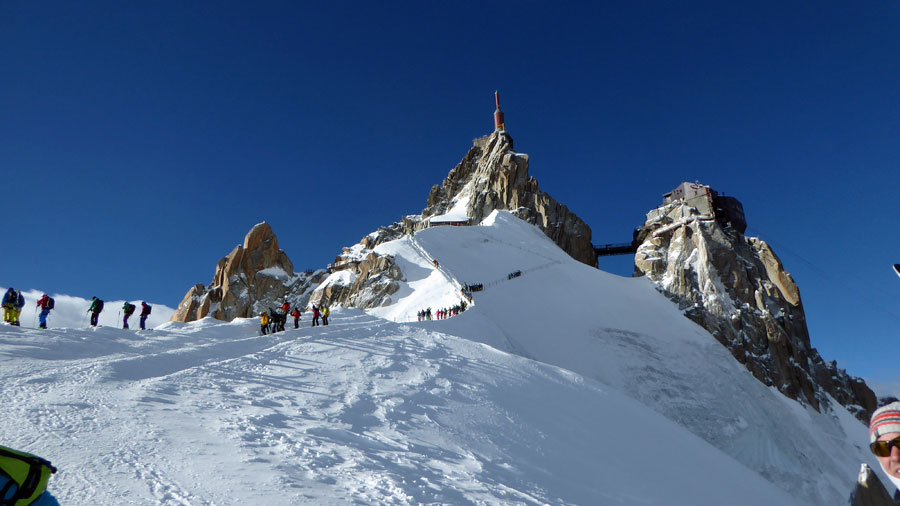 Once skis were on we headed away from the hordes who were setting  off to ski the Vallee Blanche skiing down the glacier, before briefly joining the hordes. 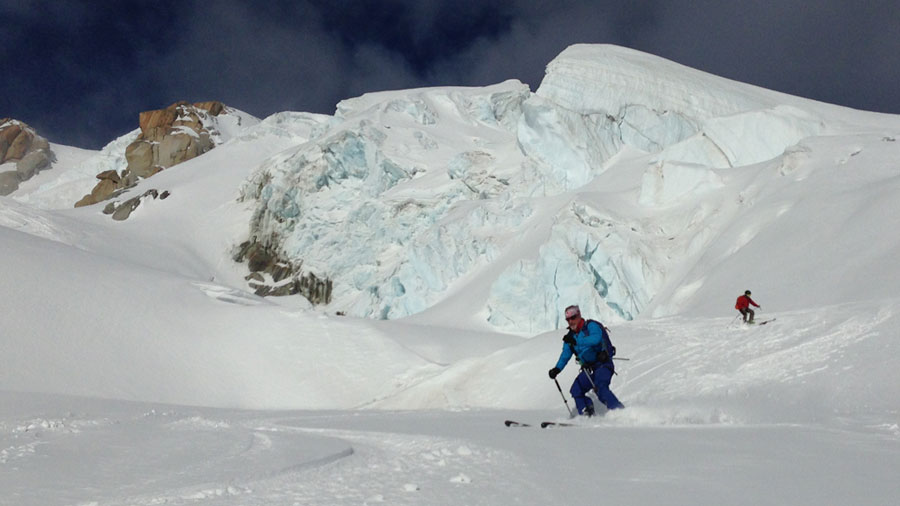 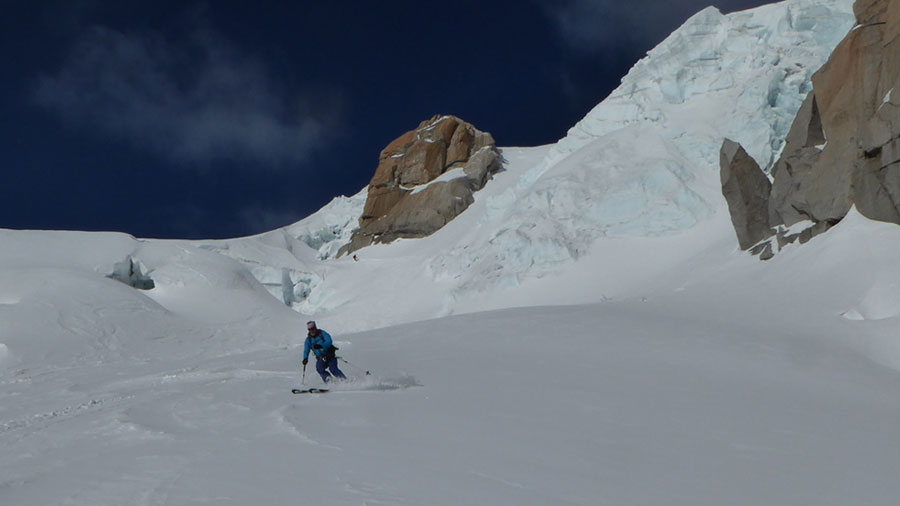 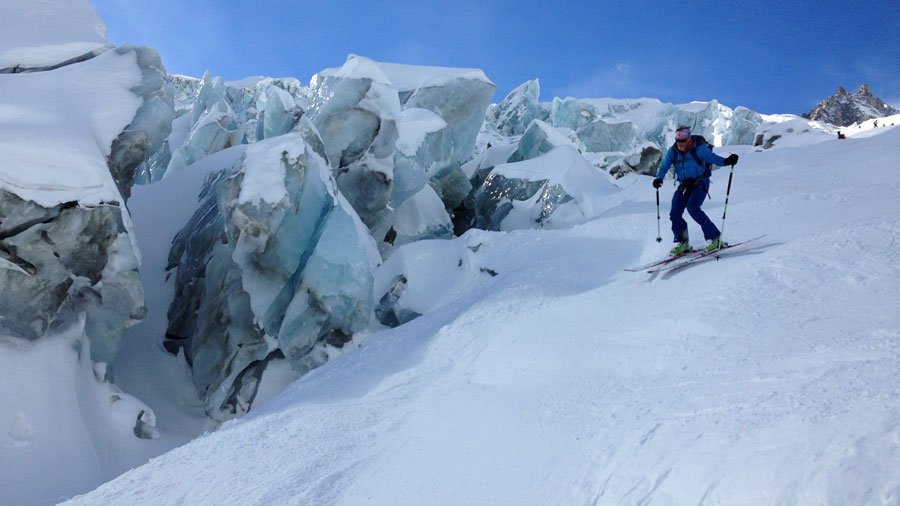 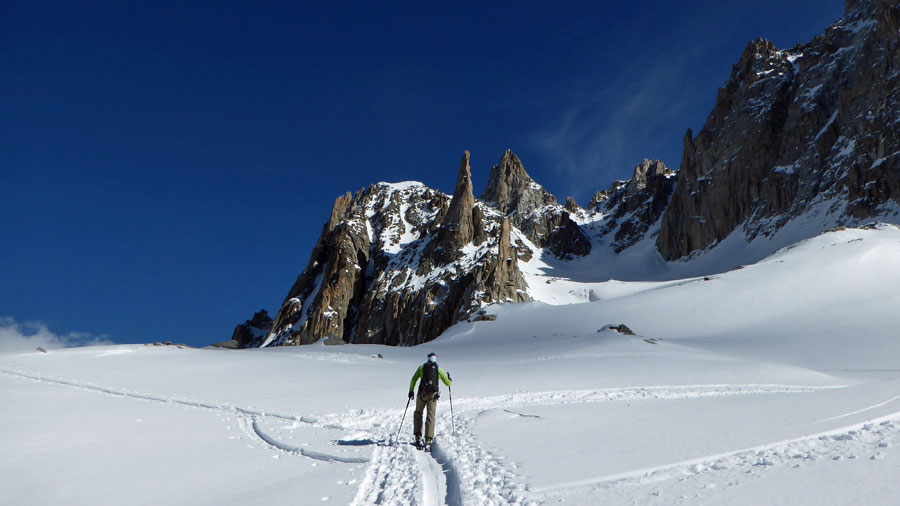 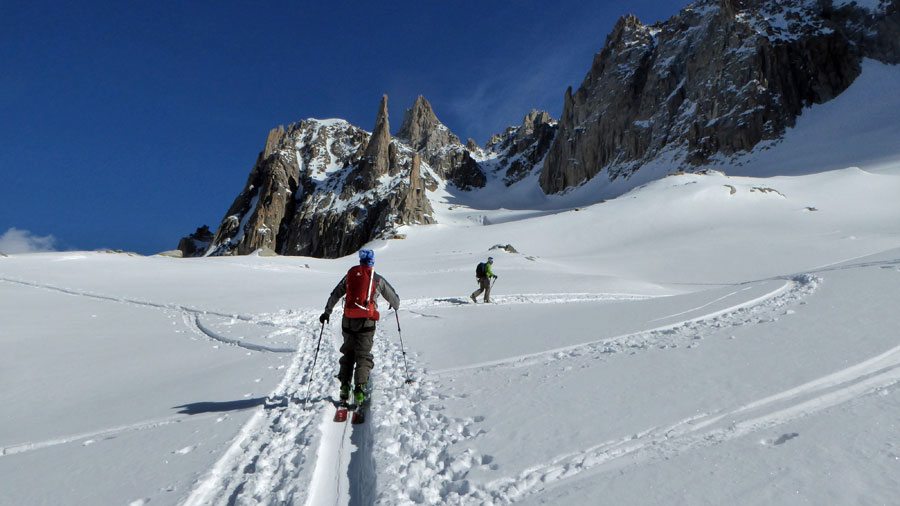 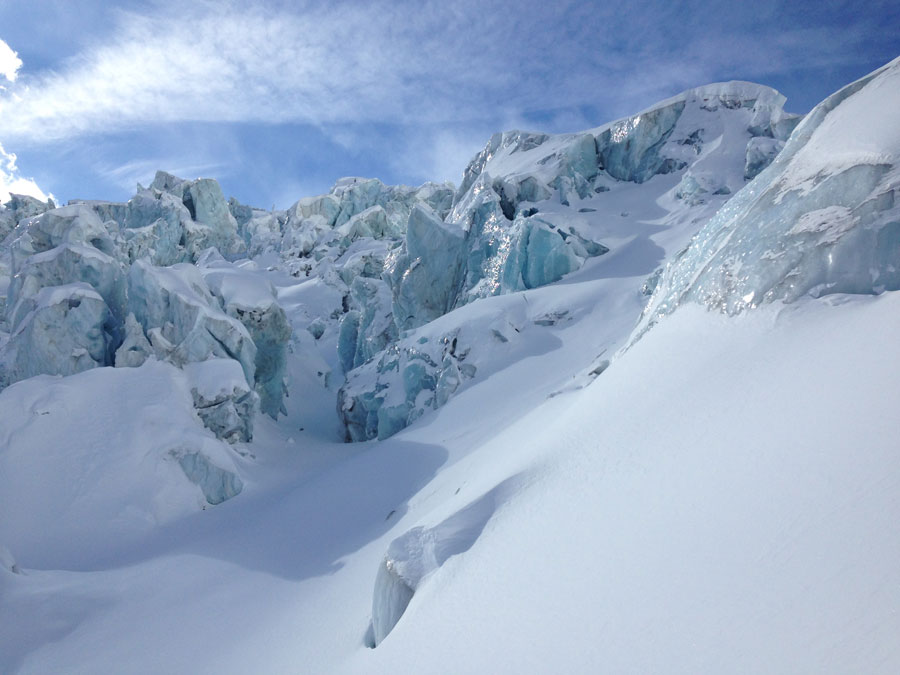 It was then skins off and crampons and ice axe as we then had a steep one hour boot pack up to the Breche. 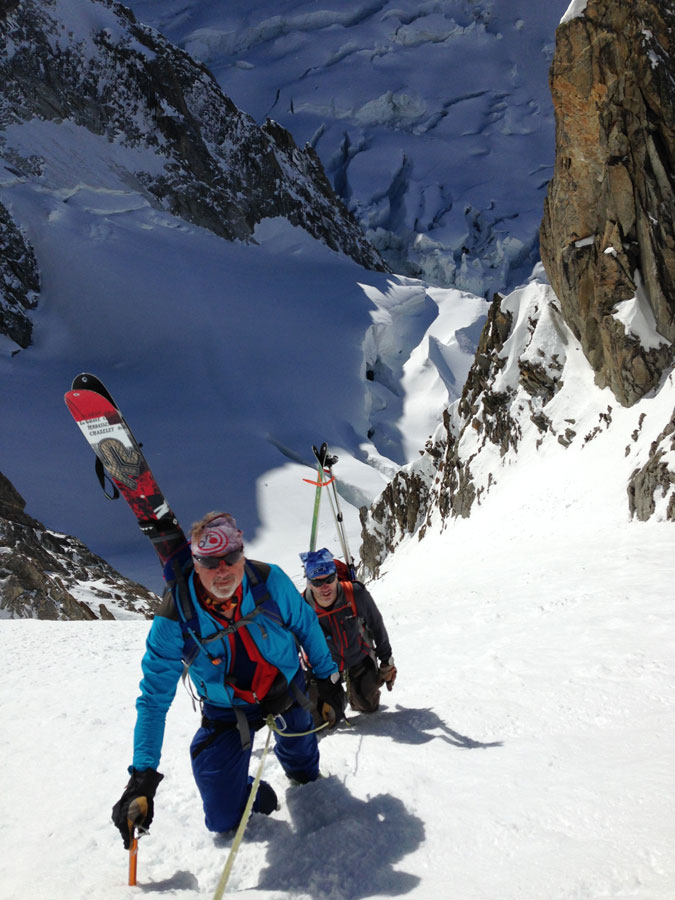 Then at the top it was Tim who was rappelled first and that did not give me a lot of confidence as he disappeared and Kris was not too sure what had happened to him. Tim is well experienced so hence I was a tad apprehensive to say the least. 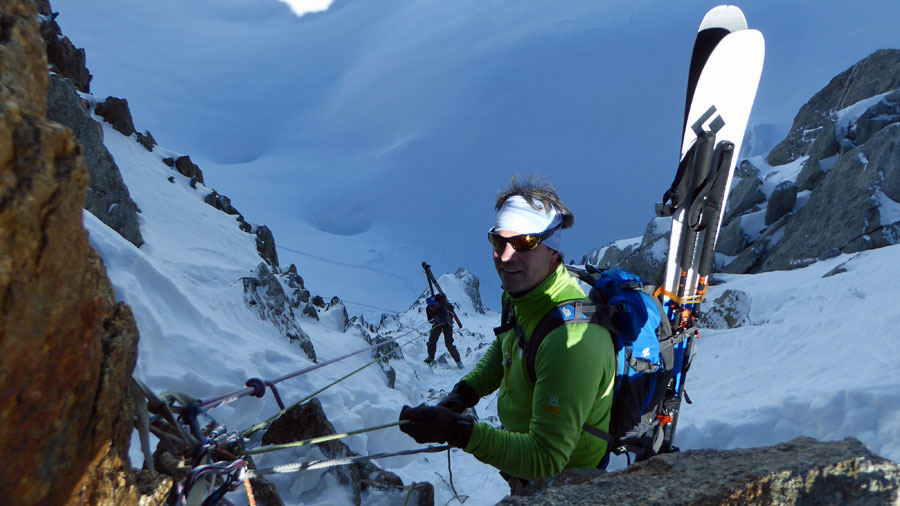 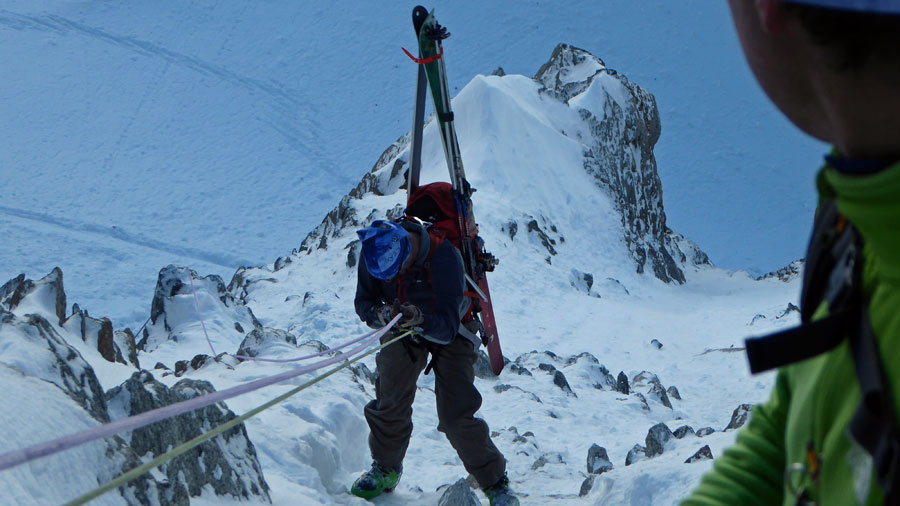 Prior to the rappel Kris did mention that we were running late and that we might well miss the last gondola. At the time I did not realise the gravitas of this statement!

Once on the Glacier de Lechaux we had a good sk, though lower down snow was chalky at best and variable.

Once we reached the end of the Glacier, Kris made the call that it was nigh on impossible to ski all the way down and the only option was to climb a fair way up to the train station atop of the gondola that we had missed, and then skin up further to a piste and attempt to ski back down to town. But serious lack of snow cover would mean a long hike out.

As it happened the hike up to the train was really tough and as you walked up the summer path there were signs like the one below over the years where the level of the Mer de Glace had been, and it's not till you see them that you fully appreciate how the glacier has shrunk, I would estimate at least double the size of Wembley stadium both in terms of height and width! 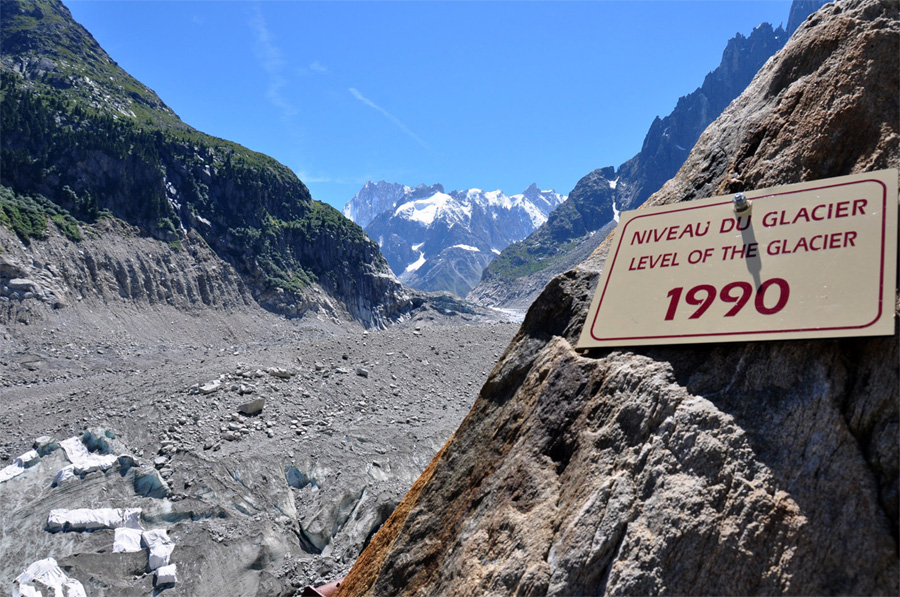 As I neared the train station I was getting really worried as to the next part of the climb and then the ski walk down as I could not see us getting off the mountain much before 21:00 and I was feeling fairly weak.

With that Kris appeared shouting that there was a train and how far back was Tim?

What a feckin relief as Kris explained it was a special train to take the construction workers back down who were up there refurbishing an old hotel, but he was not too sure how long it would wait. I then politely advised him as he set off to get Tim that if the train was to leave, I would be on and not wait for them!

Five minutes later they appeared just as the construction workers were getting angsty at waiting. What a blessing!

Thanks to Kris for a superb couple of days.