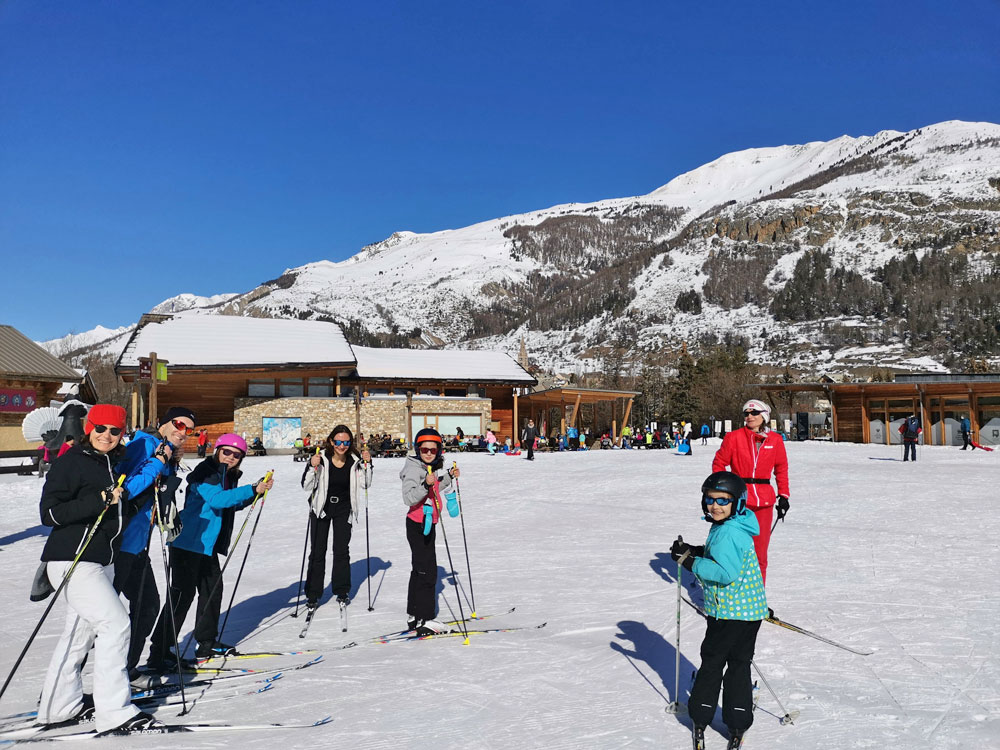 The French and their obsession with having their holidays in February are arriving in droves in the mountains, undaunted by no ski lifts, closed restaurants and a global pandemic...

Having witnessed how busy it was in Serre Chevalier in the French Alps over the New Year it's really no surprise that it's been busy the first week of the French half-term holidays.

However, you have to ask yourself why, and how it's happening?

All through January, the big question was when would the inevitable lockdown be announced in advance of the impending half-term holidays taking place across France from 6th February for four weeks? Here we should give a brief explanation of how French half-term holidays work.

France for the holiday period is divided into zones, so that not all the country is on holiday at any one time, which is normally a good idea,  as theoretically it keeps numbers, especially in ski resorts, more manageable. However, there is often the perfect storm week when two of the more populated zones are on holiday at the same time. Combine that with the UK half term and that's the week to avoid. Currently, of course, the Brits are not in the mix as they are now locked up on their island for this season.

It is something in the psyche of the French, that is nigh on a sacrosanct need to pursue a holiday at all costs, that put the French government under so much pressure when it came to making a decision about introducing more lockdown restrictions than the current curfew.

Many did initially think that the more sensible option would be a travel restriction of, for example,100km or less, thereby reducing the effect of all France travelling across the country for four weeks. But Macron values his potential second term far too much to make a decision like that and is still suffering from the hangover that was the gilet jaunes so he was not about to upset the middle classes and stop them trekking to the mountains, as usual, lift or no lifts.

And that has been the eye-opener in the lead up to the holiday season, the lifts being closed it seems have not put off people visiting.

The weekends have been even busier, and maybe that's in part due to the availability of accommodation via Bookings.com and AirBnB whereby three-night minimum stays make for a good weekend break and owners who would normally be working to a full week's occupancy are now taking what they can get.

At the weekends you see many a person climbing up the pistes with a snowboard on their back with snowshoes or boot-packing, along with ski tourers, with all the gear (any maybe no idea) as well as ordinary skiers just carrying skis in order to have a quick trip down.

In fact, here in Serre Chevalier and in other resorts where it's possible to drive part of the way up the mountain, taxis are doing additional trade in taking people back up to the top of the pistes, so that they can ski back down again.

This past week I've been both ski touring and cross-country skiing and have seen first hand just what people are up to.

The number of people taking to cross-country is by far the most amazing scenario.

As I go out on the cross-country piste there are so many people around and, I'd guess 70 percent learning (and most doing classic) and plenty of ESF instructors.

My neighbour is an ESF XC instructor based in Monetier (photo above) and she's been working everyday as, it would seem for the holidays, the ski schools have taken on many more instructors.

And like you would see on the slopes if the lifts were open, there are groups of little kids with their club gilets on looking like penguins waddling along in a line, but this time all on cross-country skis!

Even with the lifts closed it hasn't stopped the French from travelling to the mountains for their holiday. I wonder, travel restrictions allowing, how many Brits would bother to holiday with no ski lifts open and take up XC this year too?

And apart from cross-country, there are many just out on long walks, on especially groomed trails so you don't need snowshoes, along with others out on fat bikes/e-MTB's, and of course, so many people ski touring!

Even though restaurants and bars are closed because of Covid, there's even an après ski vibe as many are selling vin chaud for a takeaway by the edge of the piste with the net result that groups of younger people are gathering without masks - well, you can't wear a mask when drinking!

When the sun's out, the picnic vibe is booming as well. 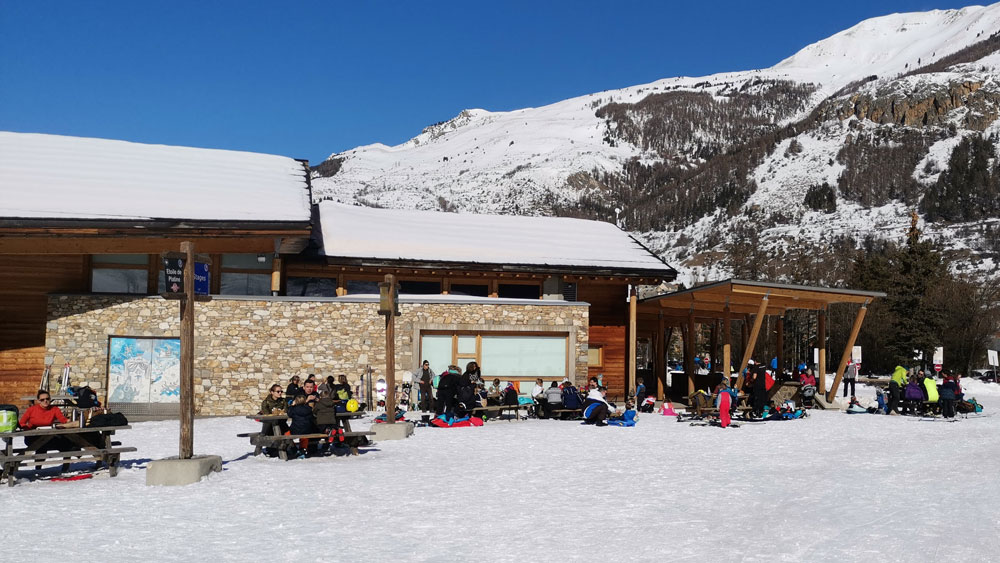 You would simply not know that there's a pandemic going on!

And as of 15th February, the lifts in Italy are scheduled to re-open so it'll be interesting to see if the French carry on across the frontier. Watch this space.

Well, we had just bought our lift pass for Bardonecchia when five hours later we heard that the ski lifts in Italy would remain closed until 5th March, at least.

We're now into the second week of the French half term  holidays and it looks like it's going to indeed be busier than last week.

And the glorious government is announcing to the public more or less to Carry on les Vacances. 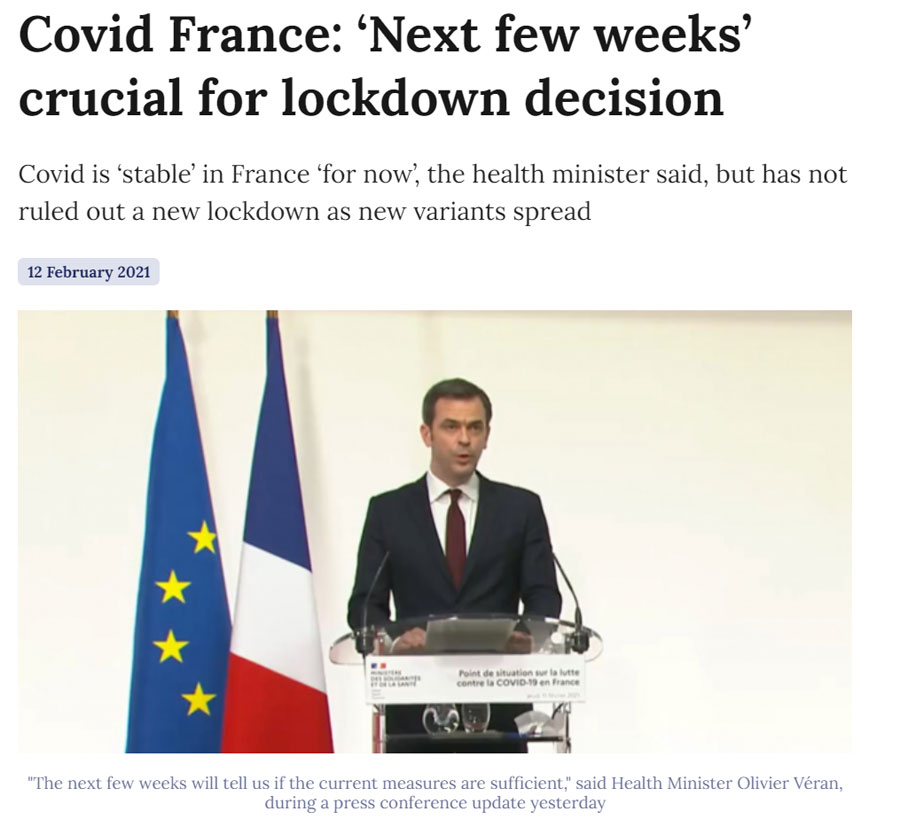 The next few weeks will be crucial to see if France's current Covid restrictions are 'sufficient', or if a new lockdown may be needed, as the health minister insists the situation is 'stable' for now.

Health Minister Olivier Véran said, during a press conference update yesterday: "Pressure remains high but is not rising. The next few weeks will tell us if the current measures are sufficient, or if we must resign ourselves to confinement measures.

"We are making no bets about the future, but we can see that we have already made up time, and we hope to avoid [lockdown].

So now we're thinking that two weeks from now we'll now go into lockdown on 8th March just as the holidays finish!

I've heard from a reliable source, head of a ski school, admittedly third hand, that Serre Chevalier is at 50 percent occupancy this week. Yesterday walking the dogs around the resort there was a fair bit going on but I would not put the figures anywhere near half capacity.

The Chazelay was sort of open, providing drinks and food as you stood outside their perimeter, and it was great to be in the sunshine having a drink with everyone well-spaced out. 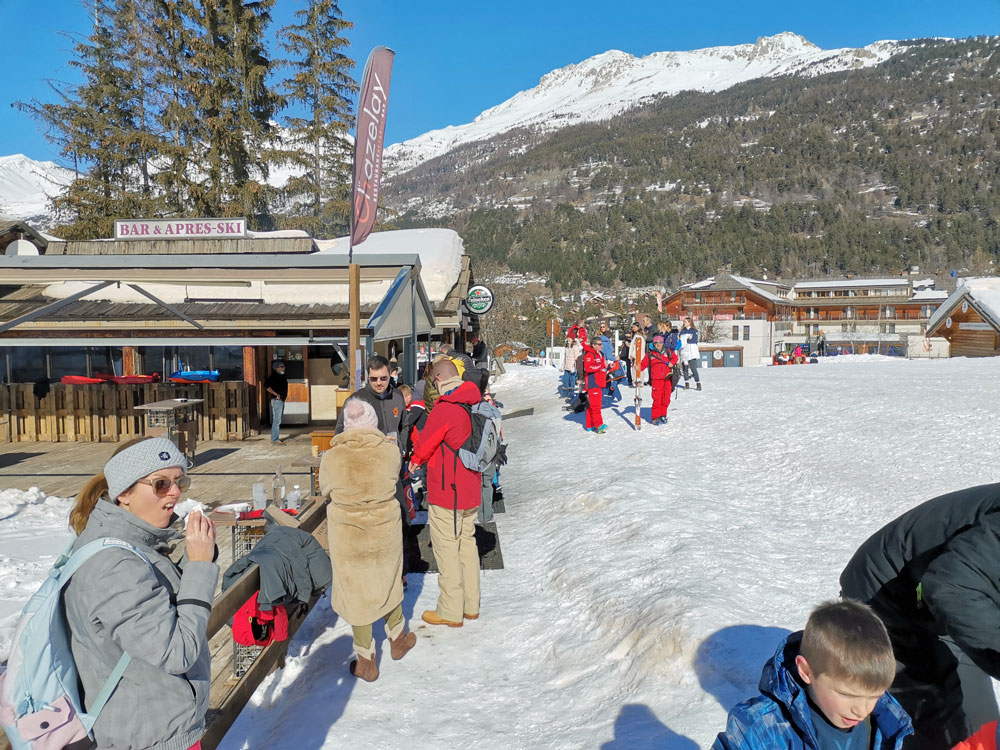 And even the local Plod came around to make sure everything was above board. 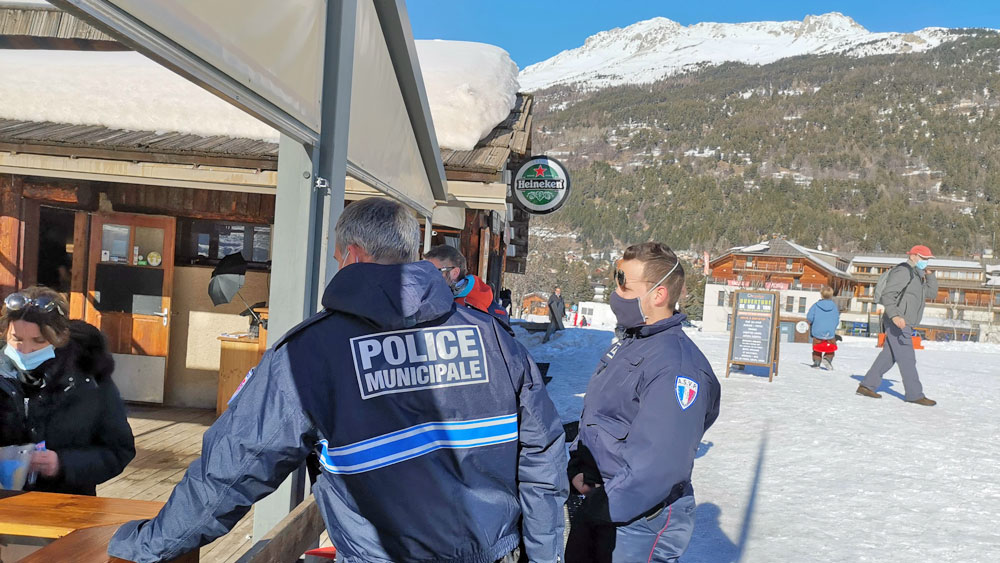 After lunch, many an instructor appeared. It would seem that learning to snowboard is on the agenda for many visitors.

And as ever the penguins - the kids in their classes - were out, grouped together en masse in the equivalent of a petri dish for infections, as we all know that kids are great at spreading germs once they get back home from school. 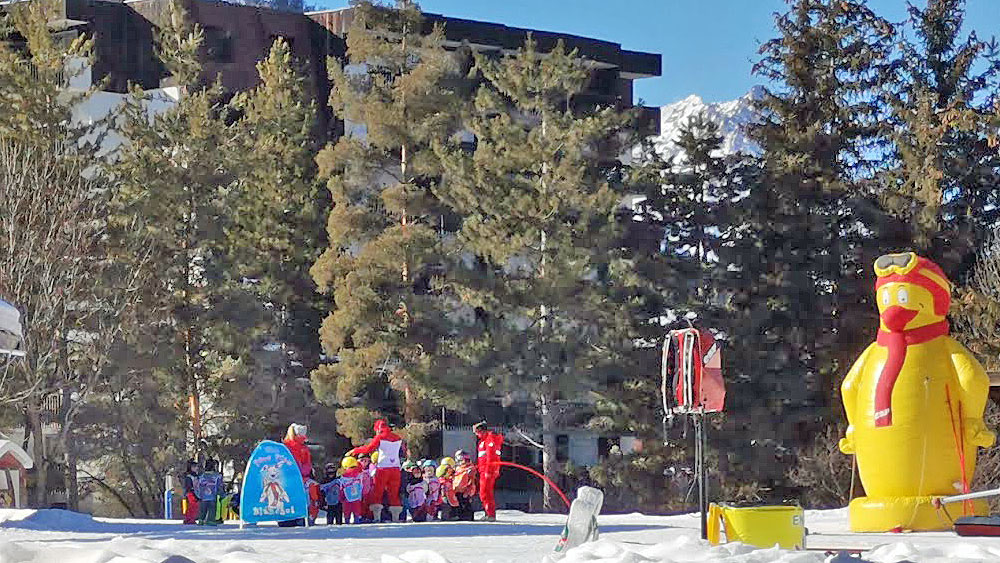 When I walked back the ice skating ring was doing great business, probably far better than usual for the time of day and time of year! 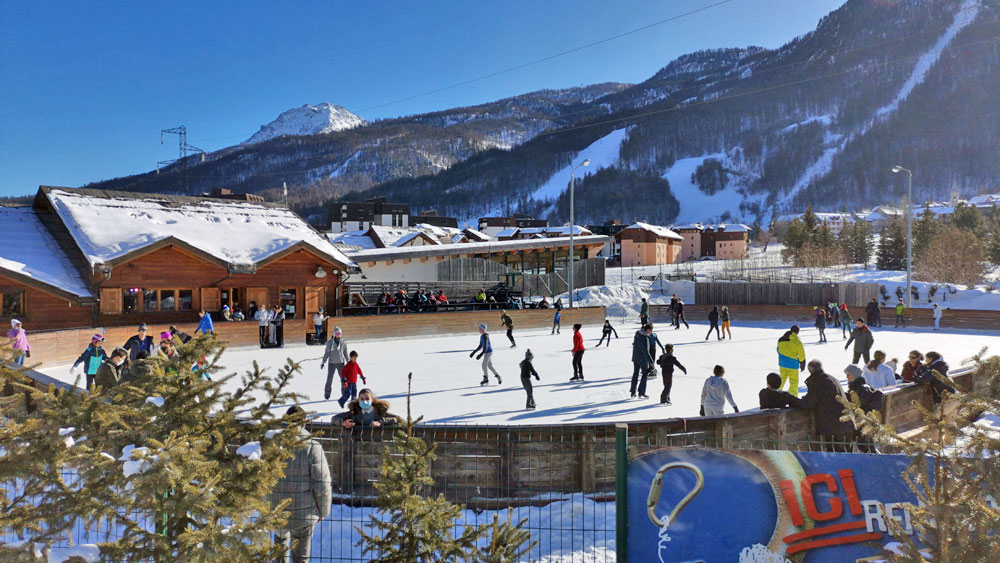 This week, the weather looks to be very spring-like so the road bike may well get an outing. I'll also be seeking out spring snow on some of my favourite south-facing slopes, but before that,I'm going round to Nevache to see if there's any untracked powder left in my Secret Garden.