How To Ski Tour For the First Time? Here's How... 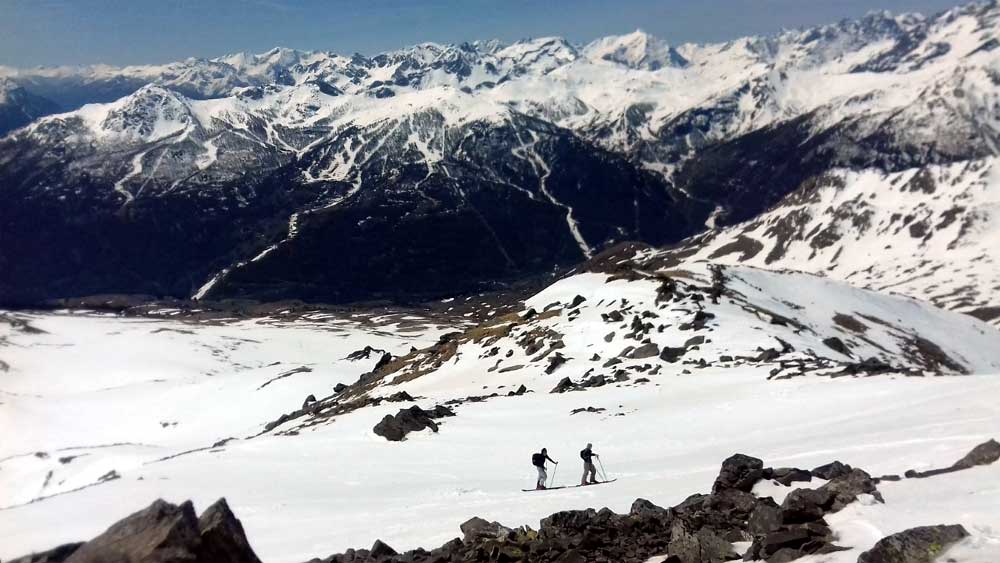 The resort is shut, you're in the mountains and there's still snow up the hill? Maybe now is a good time to find out what all the hype is about ski touring?

We finally persuaded our piste-pro friends, Steve and Yvonne, to come ski touring with us. After all, the resort closed a couple of weeks ago, they're still here in the mountains and there's plenty of snow up above 2000m. With recent freezing temperatures at night and windows of blue sky and warm sun opportunities we were pretty confident that the snow would be forgiving going up and transformed into spring for the way down

We could also drive up to the snow line on the Granon road and knew that, so late in the season, there would only be a few other die-hard locals on the hill.

So what better conditions for your ski tour debut?

Steve came with us first as he could borrow kit from our Backcountry Editor, Ken, who is never short of a touring plank or two and had the same boot size. At 08.15, Steve was ready to go and looking impressively bright-eyed considering, as he confessed, he hardly slept the night before worrying about the day ahead.

So here's the first issue for touring virgins. Anxiety. If you've only skied in resorts even for off-piste as in sidecountry, then ski touring in the 'backcountry' creates visions of gnar couloirs, crevasses and avalanches. But there's social ski touring that involves stopping for refreshments, admiring the view, never getting too out of breath to chat and then there's extreme ski touring with steep kick turns, icy traversing and the added weight of avalanche bags.

Needless to say, our plan was for social ski touring option.

The second question that can keep you awake is 'will I be able to walk uphill that far?' This is followed swiftly by the fear, 'will I get left behind and hold people up?' with the final punch in the worrying gut being, 'what if I can't ski down and I either injure myself (with no blood wagons around) or, almost worse, look stupid (with plenty of phone cameras around)?'

The above are all valid fears. But if you're a good skier (not phased by blacks) and fit, then ski touring is a walk in the park, as Steve soon discovered.

So, a week later, Yvonne hired ski touring kit including boots, skis, poles, skins, crampons and transceiver and was soon heading straight up the steep slope towards Gardiole from the Granon road. With a former knee injury and partial replacement, Yvonne had the extra worry of potential knee pain and so we all took it slowly, enjoying the scenery, the sun and the Rando Chiens (Jack Russells) chasing marmot whistles (which is why we call it Jackcountry).

We, also, used the drone, Go-pro and mobiles to record the tour, which on many a ski touring day we don't take the time to stop and shoot (see video at the end). And, amazingly, Yvonne made it to the Gardiole summit at 2753m (image below), a feat none of us was banking on for her first ski tour. Counting 50 steps when the going got steeper/tougher definitely helped because not only does this give you a goal before you take a quick breather but, also, 50 (or 100) steps can get you quite a bit further up the hill. 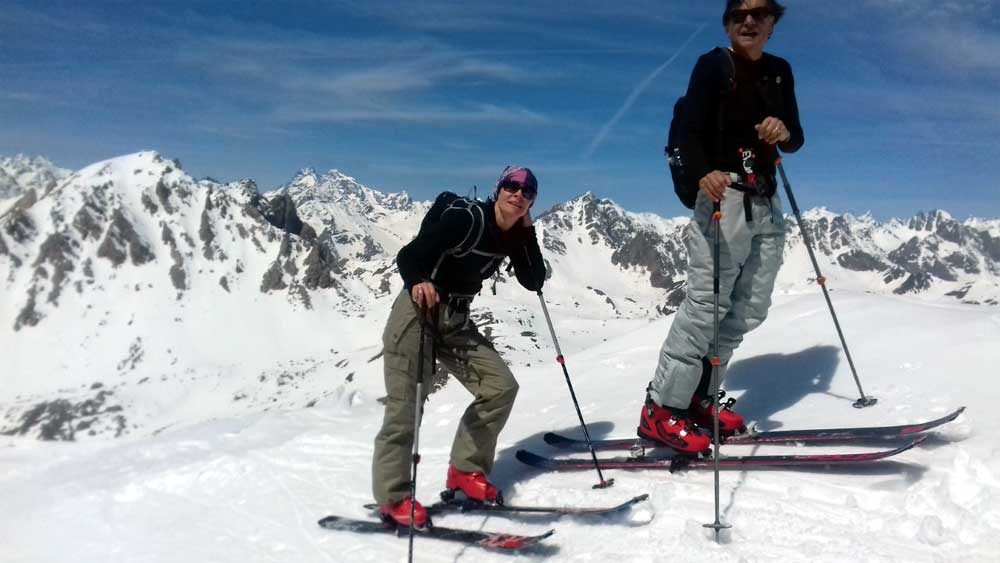 Steve on his second tour, was evangelical about the joys of touring. As he admits, after your first tour you realise that the backcountry is more la la than gnar gnar land; going up just takes determination and coming down is like piste skiing only better snow and without the people. Steve did catch himself checking uphill for people skiing down even though only a frolicking marmot was anywhere close.

Of course, it helps to go with a guide - or friends - who pick the right day and timing for the snow to transform, decide on the easiest route up without more advanced kick-turning and get the slope aspects right for the best snow for skiing down. They, also, wait for you rather than throw you the kit and then power ahead, when it becomes harder and disheartening being left out the back and always trying to catch up. This is why it's often better to go with a guide who you are paying to be patient.

Can anyone ski tour if they can ski well? The answer has to be only if they really want to. A can-do attitude is essential because some days the going will be tougher and that's when the tough get going all the way to the summit.