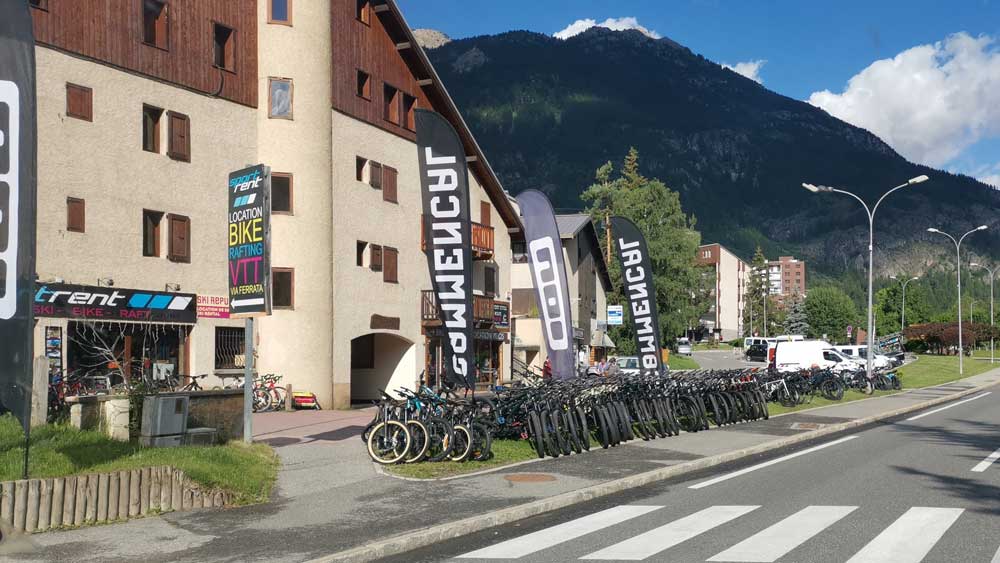 June sees some of the best conditions for cycling as the roads are not too busy and the lifts are opening too. Just watch out for afternoon storms

Meanwhile, the locals are currently battling it out to keep their Strava Local Legend status on the legendary cols, as yours truly is finding out!

Serre Chevalier and Briancon are open for business, Covid or not, and there's many a cyclist on the road heading off in numerous directions to tackle the legendary cols that we have on our doorstep.

It's also that time of year when it's best to be out early in the morning and be back by early mid-afternoon rather than risk getting caught in the summer storms that are so prevalent at this time of year, causing sudden flash-floods and landslides.

That said I take my hat off or 'chapeau' to many of the cycle tourers you see out on the road mid-afternoon having already climbed a couple of big cols before their last one of the day en route to the likes of Nice along the Route de Napoleon. These cyclists are not worried about the threat of some rain!

And while this year we'll not see the groups of American, Aussies and Kiwi's on their organised cycling tours, there are still many other visitors to replace them, and with the ever-increasing popularity of E-bikes, many more are tackling the cols that surround us here in Serre Chevalier.

In Briançon there's a new shop that's opened specialising in E-Bikes, Roue Libre, and it looks like they have a very impressive range of bikes 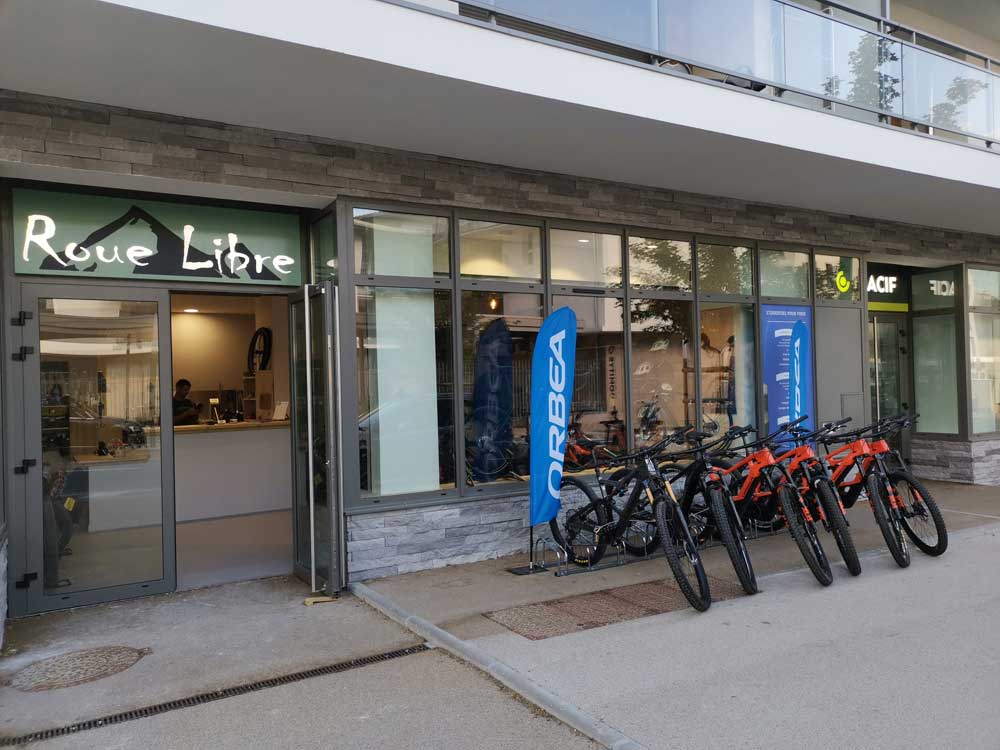 And as you drive through the valley so there are numerous shops with bikes outside, most notably Philippe Sports, near to the main roundabout in Villeneuve (top picture) who have 15 or so E-MTB's and 4 E-assist road bikes.

The weather in June has been very up and down, with few hot days, most afternoons seeing cloud building and then the constant threat of afternoon thunderstorms, which makes cycling longer routes more of a logistical challenge.

As you can see from the photo below, on longer routes, in this instance, the Boucle Izoard, which is nigh on a 5 1/2 hr ride if there's the chance of wet weather, I use a saddle-bag for dry gear. Four days later I did the same ride and the forecast was for sun all day and sure enough on the final climb up the Izoard temps were mid to high 30s! 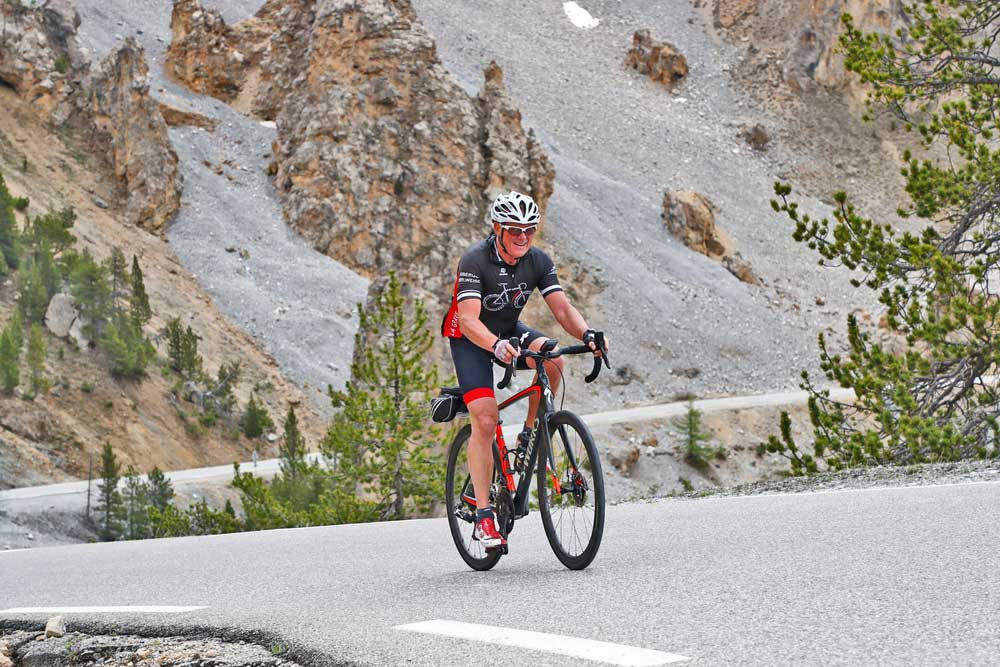 Due to a new puppy in the family, I've not been able to do as many long rides as usual, so what with the weather and puppy duties I've been staying local as well as getting back into trail running.

I often refer to the Col du Granon (more on the Granon here) as being in our back garden as we can go straight out of the apartment and hike up there. So it is that I frequently ride up there and, with the advent of Strava Local Legends, this has become almost obsessive as I've been battling it out with a couple of local cyclists to achieve that status.

Before the Granon was open all the way to the col there were a number of segments lower down, particularly 'Granon the Hard Part', with 1.3km averaging out at 10.8 percent. I've now cycled that 11 times in the past 90 days. 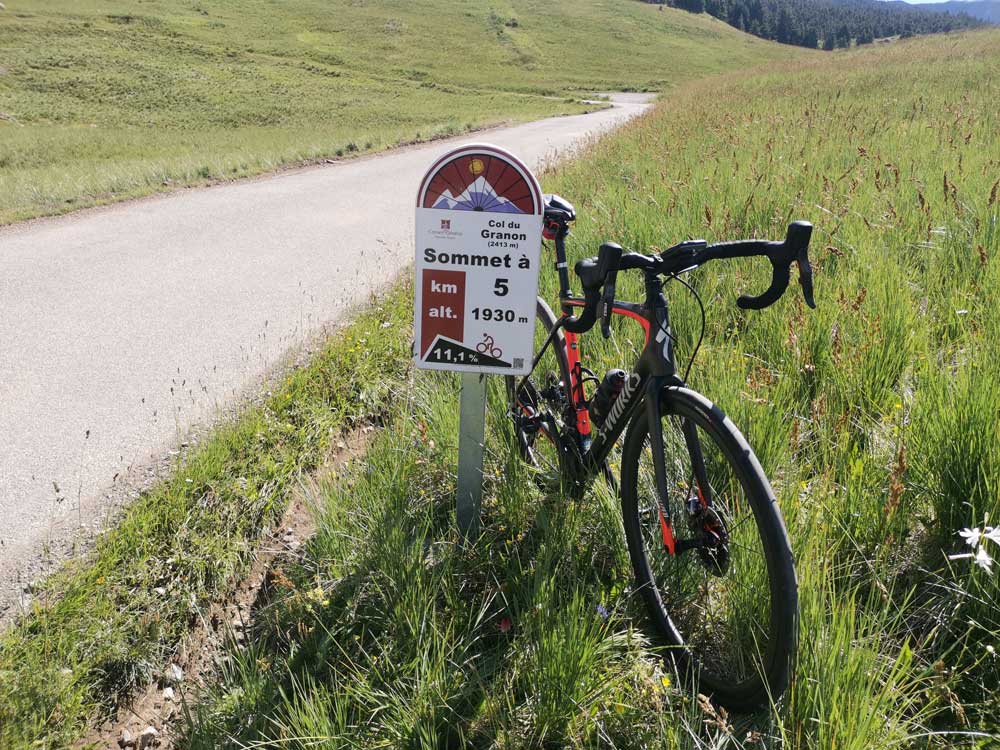 Since 6th June it's been possible to cycle to the col as the snow receded. Most people only ever cycle the Granon once, as that's enough for them, but with the damn Local Legend I've found myself cycling up there three times in a week, and no doubt I'll be tacking it again, as the various protagonists fight back and steal the Crown(s) from me :)

And I have to admit to breaking my own rule of not cycling early mid-afternoon in a desperate attempt to get my Crown back, and so, yesterday, I was caught in a vicious squall getting very wet and cold.

One of the ascents up to the col was on my MTB with the strategy being to get an ascent in to go towards my total climbs and also to cycle down the old military road to Nevache in the other valley as all the snow on the north-facing slopes has melted.

Normally the descent is possible on a gravel bike, though a little technical at times, but for the last 2/3rds it's a very good trail. However, after a recent storm and subsequent flash-floods and landslides it's now more suited to full-on downhill / full suspension bikes, and so it was a very technical / physical 14km descent, something I'll not be wanting to repeat for a while!

One thing for sure is that going up and mainly down the Granon is eating my disc pads as you're on the brakes for 50% of the descent!