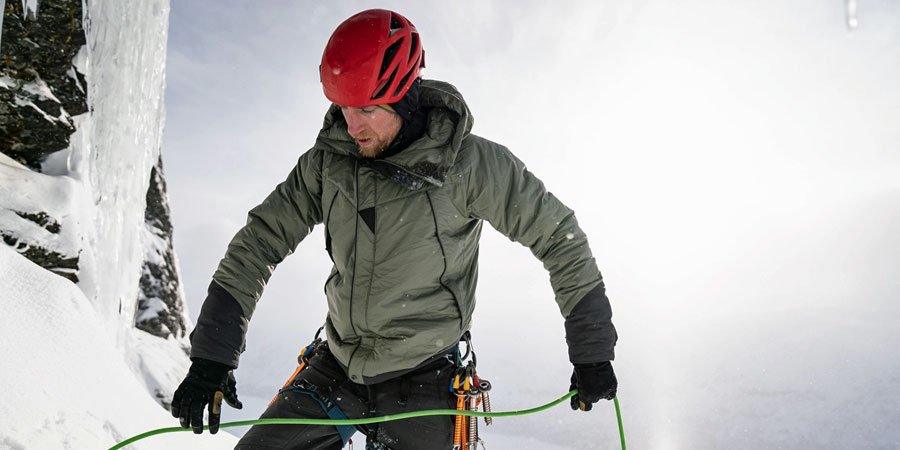 I started testing this jacket not in the French Alps where we're based but in the November gales on the UK South Coast as we waited to see if we could get out to the mountains...

The Klättermusen Farbaute Down jacket arrived while we were still working out if it was feasible to travel to our base in Serre Chevalier in the Southern French Alps. It seemed that every week doors were shutting for ski resorts - and then the announcement was made that indeed the lifts would remain closed.

During that time I was still kitesurfing in the variously named storms that hit the UK and as I run a weather site for the kitesurfing/ windsurfing community with weather data uploading every minute I know exactly how windy it is at any one time, what temperature it is and what the windchill is, all quite nerdy I know.

We often reflect while walking the dogs twice daily along a deserted promenade that when a north easterly is blowing it feels far colder than anything we tend to experience in the Alps and the old nursery rhyme The North Wind doth blow, And we shall have snow seems quite apt. So prior to arriving in the mountains finally (more on that here) the Klättermusen Farbaute had become my firm favourite jacket.

It is just so warm when having to brave the foul conditions to walk the dogs I didn't have to put on an additional layer - I just put it on straight over my T shirt. It's also done away with having to wear a beanie as the hood, helped by some nice zipper design, is a joy to use entombing your head in the equivalent of a duvet.

So while I was in an urban environment at sea-level the anthesis of a ski station, it also became my go-to jacket for going out, prior to the UK lockdown in early December, as it looked damn good. In fact, a friend asked me what brand the jacket was as he was well impressed with it, and he was wearing Arc'teryx! 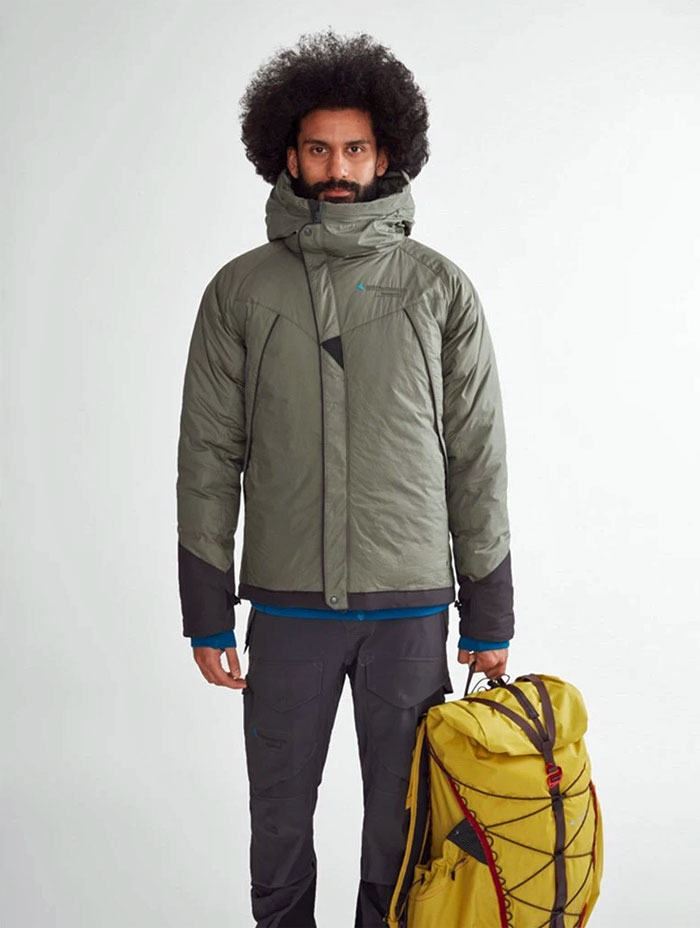 So I finally made it out to the mountains and have been here a month now during which time we've had some mornings with the thermometer reading -15C so it's a no brainer as to what jacket to wear.

Though without the lifts running I've been unable to ski in it as all my skiing is of the earn your turns variety as in ski touring and the jacket would just be too hot to consider wearing to climb up and unfortunately too bulky due to all that fabulous insulation comprising White Goose Down 93/7 (93% Goose Down, 7% Feathers) to put in the backpack on the way up and wear for the ski back down.

But what a jacket for a cold day on the lifts. I think I'd be relishing the idea of being stuck on a lift (just for a short while) pulling the hood over and sitting there nice 'n' toasty while others would be freezing their derrieres off.

And then sitting out on the terrace of the cafe, while others are finding it just a little too chilly, having to retire indoors, I'd just pull that hood up and soak up the rays.

The jacket again comes into its own in the cold evenings, although alas with the curfew in France along with bars and restaurants closed, I can't make the most of wearing it out to a restaurant. However I still have to walk the dogs, which I'm allowed to do under curfew restrictions.

Obviously, especially in the UK, I've been out in some pretty torrid conditions and the tech of the jacket has ensured I remain dry.

According to Klättermusen, 'the Farbaute Jacket is the first completely organically insulated outdoor jacket. Not only is it robust and functional; it also reduces the impact on nature on a large scale. The fabric used as the outer fabric for the jacket’s colorful components is Katla Cotton from Klättermusen: a windproof fabric made of 100 percent organic cotton and impermeable to the down behind it. The fabric consists of thousands of thin cotton fibers and is produced using a special weaving technique. Fine white goose down, Swiss wool and organic polyester give the jacket its solid insulation properties. For design, sustainability and functionality, the jury made the Klättermusen Farbaute down jacket the Gold Winner in the Outdoor segment in the Down Jackets category.'

All I know it's damn fine jacket, and I would definitelyl miss it.