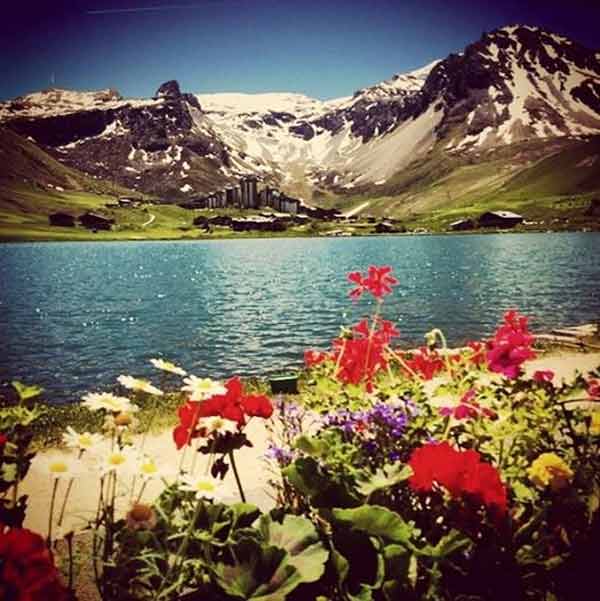 Back in the mountains Seasonairehead is learning French - and the fact that SUP does not mean supping pints.

The mountains are calling one more time for Seasonairehead to work in Tignes. But, this time, it's summer.

So winter came to a close and I was in the clutch of the winter tour op. However, I was having the best time and, as standard, not wanting to go home at all. April at home is always full of those April showers, but dramatically they come from me as I lament a winter gone and the seasonaire’s eternal problem of ‘What to do now that it’s summer?"

A lightbulb moment happened when I realised what I wanted to do in life. Having an English degree, working as an assistant for an extreme sports PR company, co-editing and managing the social media for Style Altitude all pointed to wrting/marketing for the extreme sports/snow industry. Boom. However hundreds of recently graduated 21 year olds also thought the same, and their lightbulbs started flickering three years earlier than mine. And the trouble was, I naively thought that I had enough experience to deserve a salary.

After two months of trawling jobs and one potentially life-changing interview that, after travelling hundreds of miles, opened with the words: ‘We’ve decided that this is going to be an unpaid three month internship’, I received an email asking if I’d be interested in working in an amazing restaurant in Tignes for the summer months: good pay, incredible food and I’d get to be back in the mountains.

Now I’m experiencing my first summer in Tignes and boy, is it pretty darn awesome. Obviously, the snow has retreated, taking with it the countless punters intent on having copious amounts of Jagerbombs and riding in giraffe and tiger onesies. Instead, there’s a rather nice group of ‘ex pats’: the seasonaires, who for them, Tignes has become home. It’s nice walking into a bar, knowing the guy behind the bar pretty well and also everyone in the bar.

There’s also been a shed load to do in the summer, including the opportunity to shred on the glacier. One of the first things that we tried was stand up paddle boarding, and consequently got pelted with potatoes as we approached the restaurant for a beer: the sous chef thinks that stand up paddle boarding is lame. Sitting in the sun, with a beer in hand, the thought that life was sweet simultaneously crossed all of our minds. Cue the guy from the watersports station heading over the lake in his speedboat to shout at us for ‘drinking and supping’. Who knew that that was a Tignes error? For us, it just made the challenge of having to balance on the board more testing, especially after our boss had come out to give us a sneaky shot of Genepi. 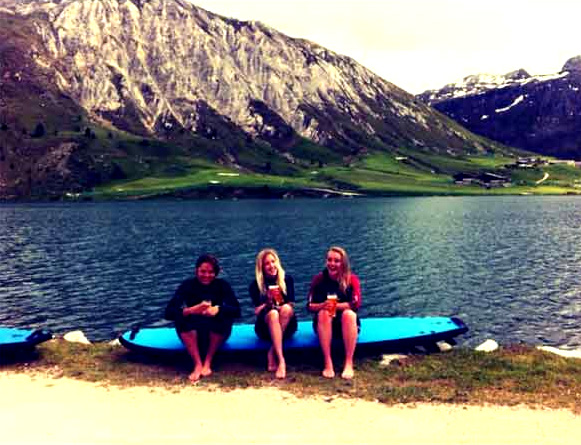 Working in a restaurant where 90% of the customers are French, and not really speaking French, myself, has definitely provided a lot of giggles. There was the first day where we each had about 50 covers. The adrenaline’s pumping and you just end up saying as many French words that you can remember from GCSE French eight years previously, resulting in us waitresses seeming crazy as we randomly shout ‘poulet’ and ‘ou est le bibliotheque?’

The summer season is short, with our last day of service being the end of August. Yet, when you’re 24 and a little bit lost with what to do in life, let alone a summer, it’s nice to breathe and come ‘home’ for a month or two, especially when your home’s ‘le plus bel espace de ski du monde’.

Hmm, maybe some of that French is sinking in after all.

Winter in the morning then summer in the afternoon

The Serre Chevalier Ski Season Stuttering to a Finish

What a difference a few kilometres make. With little fresh snow in Serre Che, Montgenevre, 11km as the crow flies, scored 30cm and Claviere next door Italy had nigh on 40cm...more

Could Ski Touring Be The Route To A Long Life?

10,000 steps a day? Pah. Try ski touring up a mountain and skiing down in technical conditions. Yesterday we met a group all over 85, proof that ski touring helps you live to a ripping old age...more

Eurotunnel vs the Ferry which is the best crossing

Over the years we've travelled to and from our home in the Hautes Alpes many times. But which is the best way and the cheapest to travel, the tunnel or the ferry, as both have their advantages?more