Going Off Radar. 6 off the Grid Backcountry Ski Trips 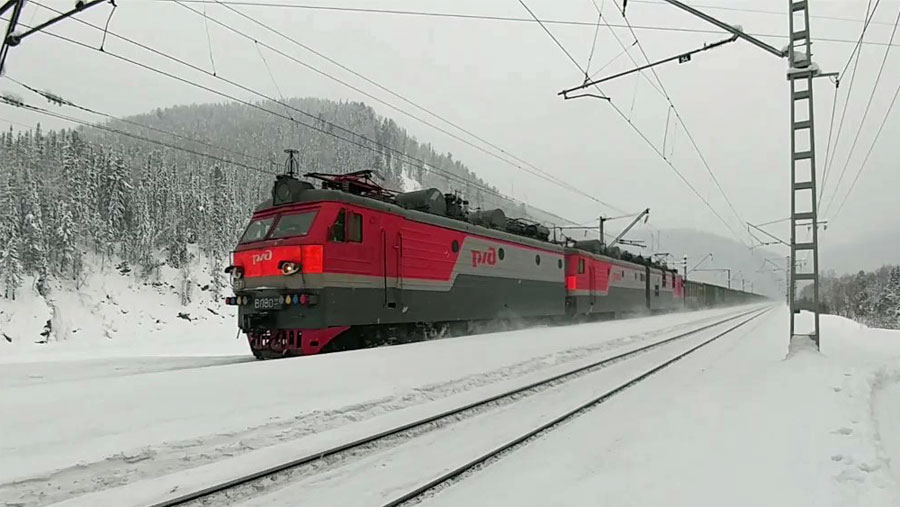 Pioneering new powder destinations is for those with the money - and balls - to go 'flakcountry' as in dangerously beyond any potential rescue. Siberia, Kamchatka, Mount Elbus are three of the most off grid ski destinations for pioneers of new powder adventures...

Where's your next backcountry ski or snowboard trip? Chamonix? No thanks, been there, done that, got the Mont Blanc t-shirt. La Grave? Nope, got the 2150m descent sticker. Okay how about Lyngen, beyond the Arctic Circle or the opposite way to ski icebergs down in Antarctica?

As far flung as the latter two are, even they are becoming blasé backcountry destinations. Today, among the majestic peaks off the fjords of Norway accessible only by boat, there is no guarantee of being alone in the white wilderness - stand and listen to the peace and quiet and chances are you'll hear the sound of Italians chattering on their mobiles ascending up the opposite side of the summit.

This is because going off radar is becoming more and more of a challenge - the challenge being to discover the final snowy frontier and boldly ski where no man (or woman) has ever skied (or snowboarded) before. The harder it is to get there, the more points you score for intrepidation, if not necessarily for reducing your carbon footprint. Two plane rides, across a strait, overland by train and sledge pulled by huskies for the final stage? High five for endeavour, this is hardcore travel. Going by heli is almost too easy (though, hey, if you can afford it then why not?). 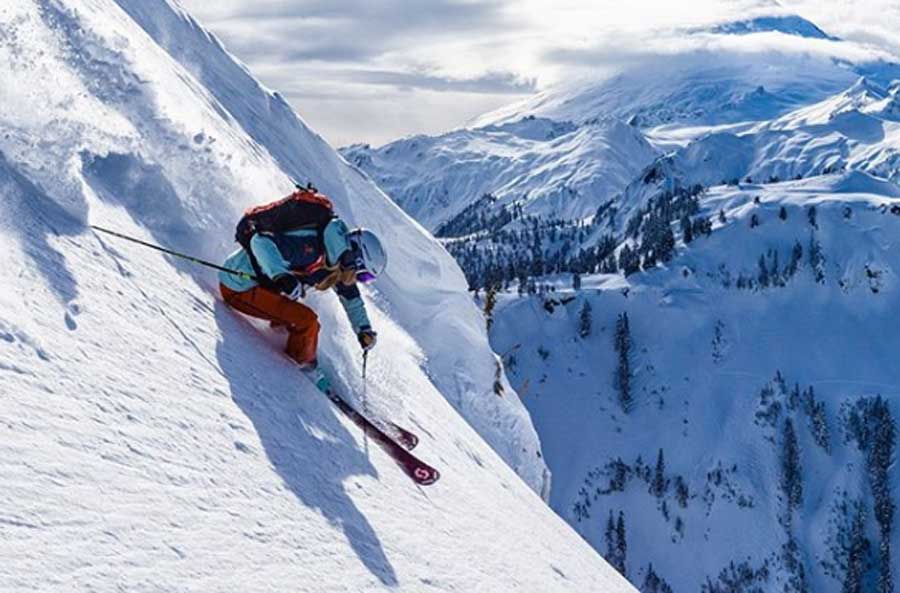 The perception of the ultimate ski destination for affluent skiers has changed dramatically. Even though the November issue of Conde Nast Traveller, listed the readers' choice awards for skiing with Gstaad, St Moritz, Courchevel and Val d'Isere all in the top 5 destinations, anyone with money and powder skis or snowboard is actually more likely to put heliskiing in Alaska or snowboarding via boat in Antarctica as their preferred choice to piste posing in Gstaad.

'Backcountry skiing was for the ski bum who could not afford a lift ticket. Now it is a much more sophisticated affluent client that wishes to avoid the crowds and looking for fresh powder,' Doug Stoup, polar pioneer, ski advernturer and expedition guide has made first tracks in many back backcountry skiing and snowboarding destination.

'For the past 20 years I have been searching the planet for remote and untouched places to ski and snowboard,' says Doug. In Antarctica, he was the first to ski and snowboard off the highest peak of the Vinson Massif in 1999. Two months later he chartered a Russian research vessel and travelled to the Antarctic Peninsula before exploring the potential of Svalbard. And, this winter, it's Mount Elbrus.

Pioneering new powder destinations is not for the faint-hearted or cash poor. It takes money - and balls - to go 'flakcountry' as in dangerously beyond any (immediate) rescue and the very real possibility of enountering a bear or puma. But there are plenty of mountain guides who are willing to go the extra mile, their expertise and pre-trip reccying making flakcountry as safe as reasonably possible considering the distances and remoteness involved.

So for those who are looking to go beyond boundaries - and bank balances - here are the 6 off-grid trips that'll test not only your skiing and snowboarding in powder but, also, your survival instincts plus your resourcefulness when your ski boots are left back on the tarmac at Heathrow. (Top tip: always take them as hand luggage). 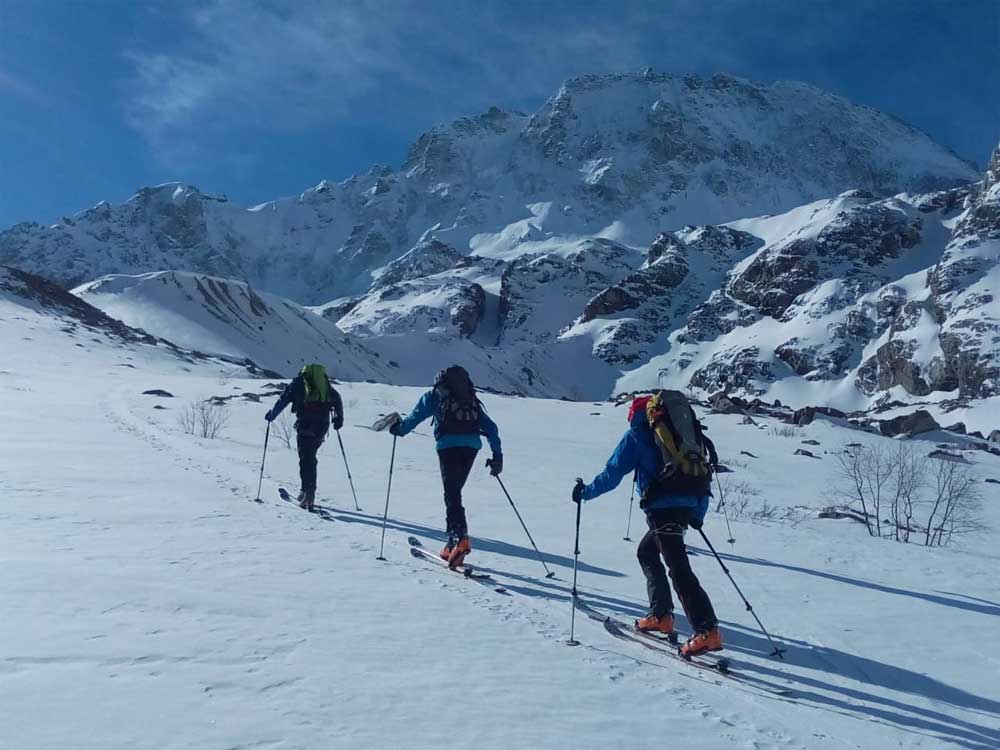 Latest out-there trip from Ice Axe Expeditions is Elbrus, which Doug Stoup skied in 2002. It starts with two days in Moscow and then travel to the Caucus Mountains for some acclimatisation ski tours followed by an attempt to climb Elbrus, at 5642m the highest peak in Europe  at the border with Georgia. The ascent is accompanied by a certified senior mountain guide who has experience with the Caucus's and Elbrus. Limited to about 10 clients with add on single supplement and St. Petersburg on the end if requested. 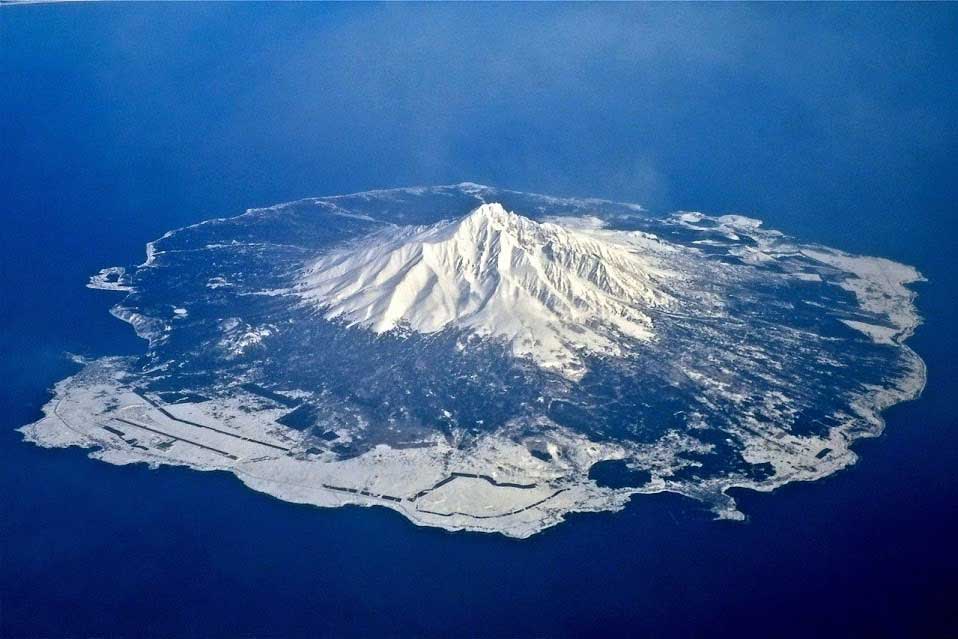 How about skiing on your own snow-covered floating volcano? According to the guys at Sherpa's Ride offering trips to Rishiri, this winter, skiing on this mountain in the Sea of Japan off the coast of Hokkaido, will be like having the island to yourself and all its possibilities for skiing or snowboarding down any side with its powder-filled gullies. Far from the maddening crowds in the popular ski resorts like Niseko, the island spans 19km from north to south and 14km from east to west. If the weather is good you can take one day to do the summit of Mount Rishiri, 1721m, worth it for the 360 degree views and, of course, the ski back down.. Snowmobiles are available for the first 300m of each tour. Check out more here. 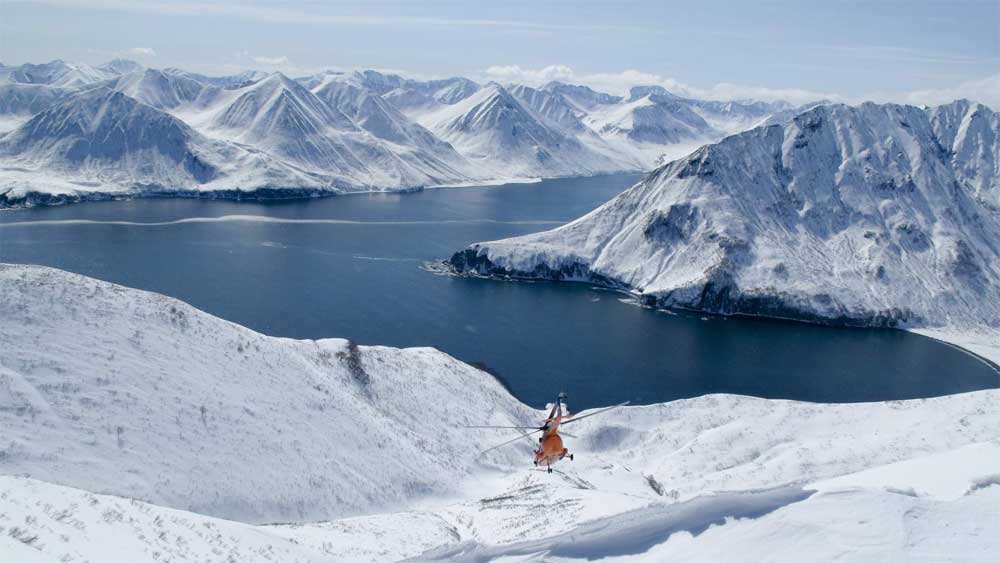 The Kamchatka Peninsula is the size of Germany, Austria and Switzerland combined with a population of just 377,900 in the east of Russia. At 4,750m, Klyuchevskaya Sopka is the highest of the peninsula's 200 volcanoes, 29 of which are active. 'Skiing to the beach from the summit of a smoking volcano, soaking in a pristine hot spring at sunset, barbecuing on rivers of molten lava, racing a 650kg brown bear down the mountain, to have just one of these experiences in a lifetime would be special, to have them multiple times on a daily basis will change the way you see the world', according to James Morland of Elemental Adventure. He has been organising heliskiing in Kamchatka since 2005 and throughout the snow-covered parts of the planet (see Himachal Pradesh, below) fueled by a passion for skiing and adventure in beautiful, remote places, untouched by the modern world. 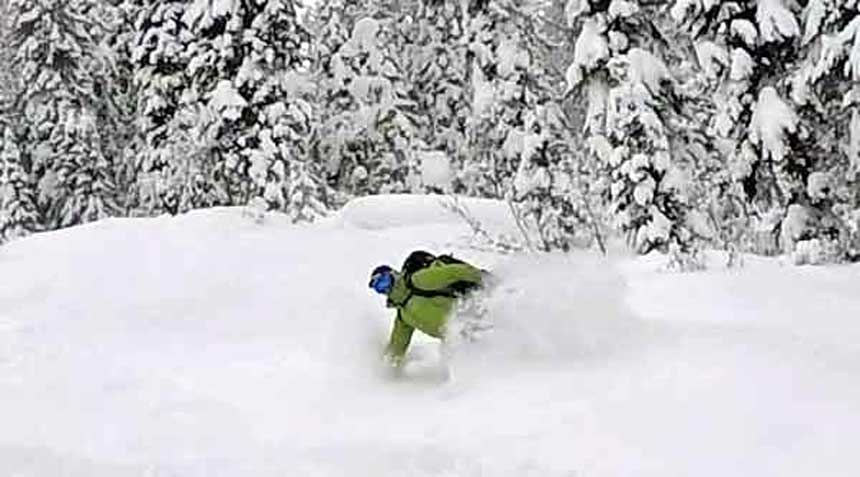 There's a good reason why Siberia was used by Russia for gulags keeping prisoners secure in exile as it's one of the remotest destinations on the planet as our Tech Editor, Gavin, discovered on a November trip there last year. That said, it is also pretty reliable for early season snowfalls and temperatures dipping to a dry minus 20C and beyond, keeping the powder light. So for a pre-season warm up (though there's nothing warm about Siberia) the Luzhba Ski Touring Lodge is a trip worth taking.That is, if you survive the visa hassle and getting yourself with kit across Russia via two planes, train and van. Read more here. 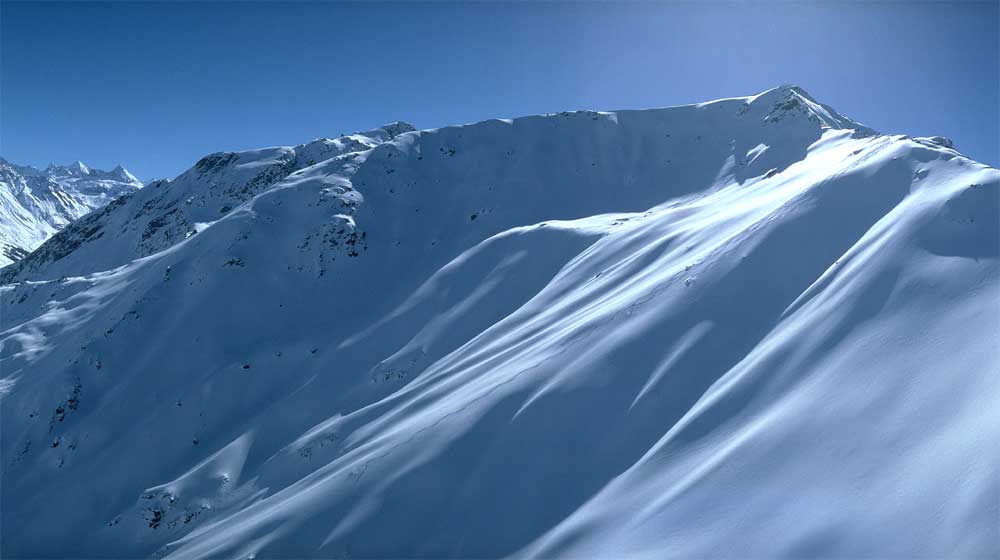 The skiing in the Himachal Pradesh region in north-west India combines skiing or snowboarding in the stunning scenery of the Himalayas with the stimulating cultural experience of the vibrant Kullu Valley. It is something that is 'out there' on its own in terms of extra special ski and snowboard experiences according to Elemental Adventure. Starting high with heli landings up to 5,000m and views of 6,500m peaks rising above for skiing down steep cirque bowls and long rolling ridge lines, through glades of birch and finishing in towering forests of cedar. 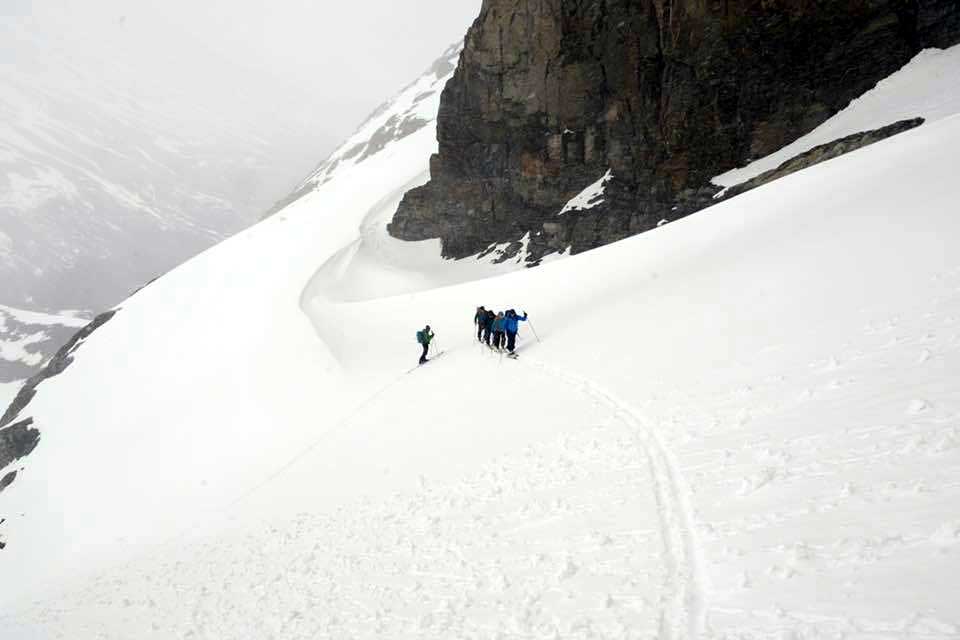 Mountain guide Stefan Palm has been going off grid for years, pioneering new powder fields all over the globe. Recently he's been off-grid touring Cerro Castillo (2675m) and Cerro San Lorenzo (3706m), two mountain massifs in Chile's Patagonia. This trip he described as, 'expedition skiing', mountaineering crossed with skiing crossed with going into the wilderness with all the potential risks, the most dramatic being a close encounter with a big puma on the first night at their campsite.

(Apart from the obvious transceiver, shovel, probes, good insurance and maybe a tranquilizer dart for bears and pumas)

In surroundings such as Siberia or off-grid where a phone is pretty useless due to no signal, it is good to know that, in an extreme case of emergency, contact could be made and precise positioning communicated to the relevant rescue service with the SOS Garmin InReach Mini (although bear in mind that rescue could take a while if you're stranded on an iceberg).

And it's not just in locations such as Siberia. Even in the Alps there are a few areas where mobiles do not work, and the thought of being out of signal and out of contact is pretty scary if there's an emergency.

There is other associated functionality to use with it via the Earthmate® app which easily pairs the INREACH MINI with your SmartPhone so you can download routes and tracks from your laptop to the App and use these as navigational aids.

Then, of course, there is the SMS Text and email functions where you can send predefined messages to base camp and loved ones, such as 'starting descent' or, 'back down safe' all will have the grid reference of the location from where you sent the message. 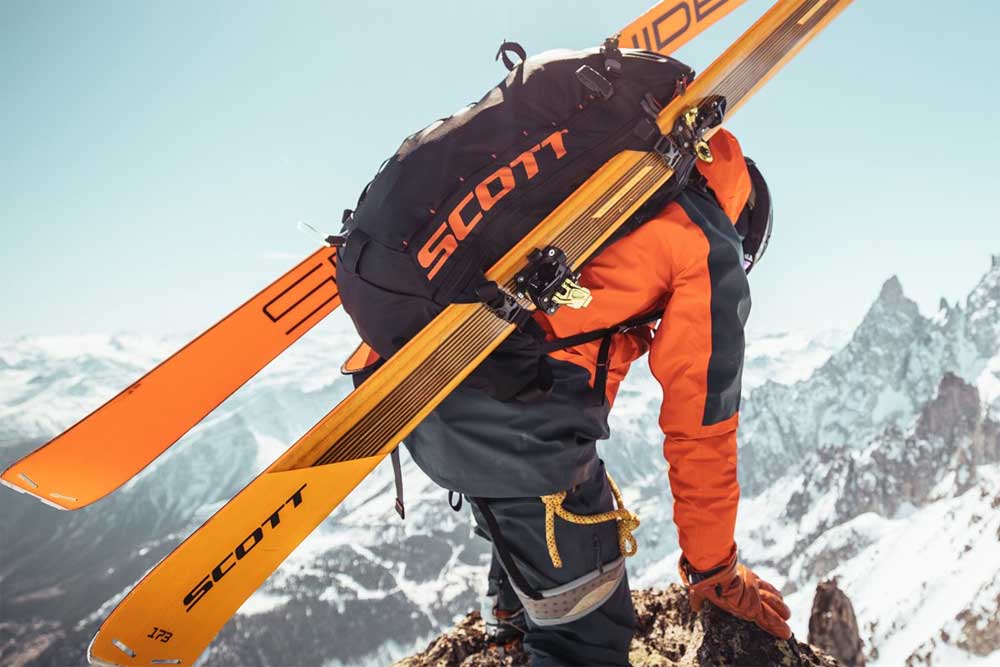 This is currently one of the lightest electronical airbags on the market - and light is always right when it comes to travelling to remote areas potentially via train, heli or on foot, ski touring while packing essential kit  (such as shovel, probes, layers, and water). SCOTT's Patrol E1 Alpride in 22L, 30L and 40L versions, uses the latest supercapacitor technology without cartridges so for travel, just take the batteries out and the airlines won't leave your no longer potentially explosive bag back where you embarked.

Ski touring hut to hut for three days or more? Then forget what your mother told you about changing underwear and socks everyday. Check out what to pack for longer ski touring trips.