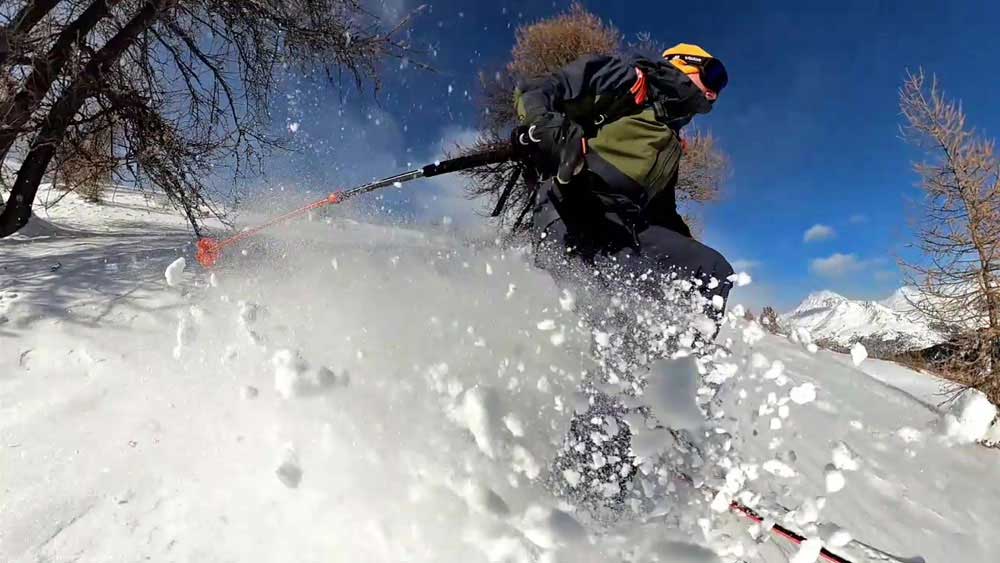 The wind, sun, aspect and temperature all affect the snow off piste, so what looks like perfect powder can turn out to be something a lot more challenging...

A group of powder hounds with avy bags and wide skis were up early and on the Vallons, this week, when it was the first day the chairlift had opened after a two day 50cm dump of snow. They were understandably excited because the Vallons opens up a wide area of off-piste.

But their enthusiasm turned to dismay as they ascended on the chair. The perfect powder had been windblown over two days leaving bare patches, rocks and a suspect crust. Of course, the wind has to blow the snow somewhere and, for sure, there were pockets of powder and potential good turns to be had in the shelter of the trees, but the snow was nowhere near as good as everyone had hoped.

In the main image, Gav, was descending what, in places, was pleasant powder a few days ago. However, thanks to the wind and cold temperatures, he also hit polystyrene crust that exploded on ski impact like shrapnel.

But it wasn't 'bad' snow. There is never bad snow. As a sign hanging in a bar in La Grave states: 'There is no such thing as bad snow, only bad skiers'. To be fair, if you're freeriding in La Grave, you really don't want to be a bad skier.

The word you need when you've just descended leg-breaking crud or windblown crust  is 'technical'. You don't exclaim: 'That was absolute crap' after ploughing through heavy deep snow that solidified like cement around your calves, which you thought was going to be floaty light powder. You say, 'Hmm, it was a tad technical'.

Cold pow, Japow, and 'champagne pow' (which is 'technically' the copyright of Steamboat Ski Resort), this is the snow we all fantasise about. It's cold, dry snow with little moisture, hence, also called 'blower pow' because when you blow it off the palm of your hand it hovers like a cloud in the air. This is the magic that makes you ski like a god or goddess compared to 'technical' off piste snow that can make you ski like Homer Simpson down Mount Embolism.

But, as they also say, 'what doesn't kill you, makes you stronger'. So provided you survive the crust and the crud, you will become a stronger and better skier. Technically speaking.