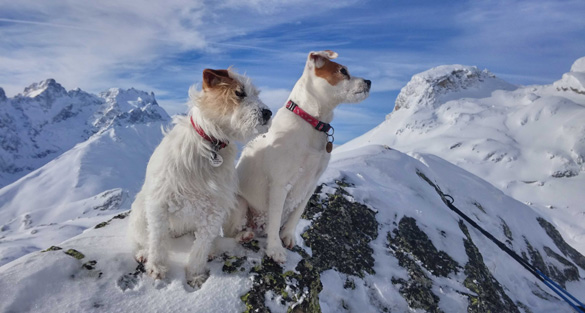 Dogs may love the snow but would you take them ski touring?. Editor, Elaine Deed, talks about ski touring with dogs, riding with two Jack Russells, going for three or four hour hikes up the mountains - and flying down. Exhausting for the dogs? Pah, for powder hounds like them, it's a walk in the park.

It was spring in the Alps and we'd decided to try our Jack Russell, Kiki (right, above) on a small ski tour, wondering if the snow would be too cold, too soft, too tiring for her. As we left our van by the side of the road at the Pont de l'Alpe, with Kiki under Gavin's arm, we were stopped by a gnarly looking French mountain guide returning from an early ski tour. He shook his head as he stroked Kiki and we thought, oh no he's going to tell us not to take her. 'Ce chien est superbe. Très fort!' He smiled and took hold of her paw, 'Voila! Parfait pour la neige.'

Four years later, we now ski tour regularly with Kiki and her daughter, Beanie (above, left) with us, too. 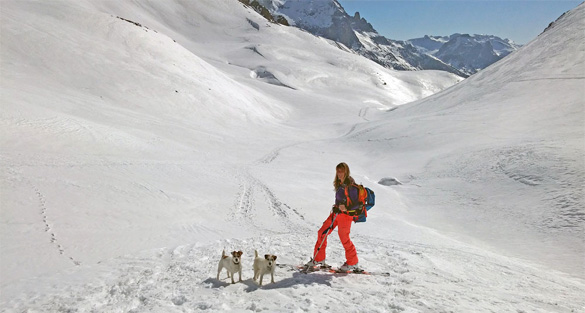 They're known locally (and on our blog) as the Rando Chiens.  And we absolutely agree with the old ski guide, Jack Russells are very 'fort', strong. They can go for miles (we had another Jack who happily ran a marathon over the South Downs) so distance, ski touring is not a problem. And, because they are light with small paws, they can travel over hard-pack, especially early in the morning when the snow is still cold and hard, without sinking in.

So what happens when the snow is deep and soft - or melting spring snow? Well, they're not stupid, either, because they follow in our tracks both going up - and down. 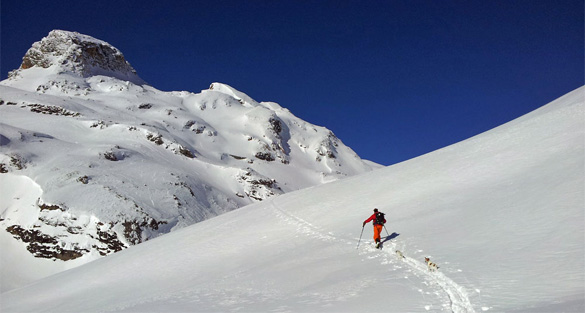 Of course, going up is fairly slow and easy for them, keeping up with our ski touring pace of around 350m an hour. When we reach the top, we have a rest and share a snack and water with the dogs. Then we take the skins off, tighten our boots and click into the bindings. That's when the dogs look at each other and seem to get as excited as we do by the prospect of flying down the mountain. 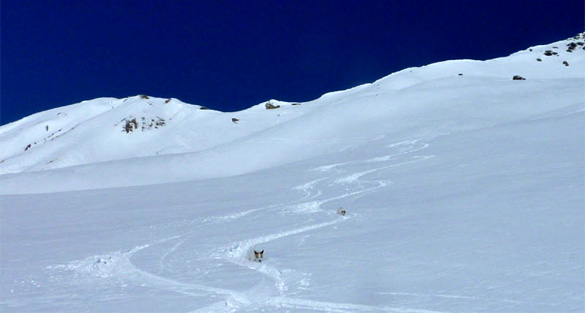 One of us waits behind to make sure they are on the right tracks, following the leader (as, often, they are too small to see over the snow line) and, whoever's in front never goes too far ahead of them so they can see us and catch up when we frequently stop. Coming down the mountain at leisure like this, really makes you appreciate the descent and enjoy every turn, rather than hacking down as fast as you can. 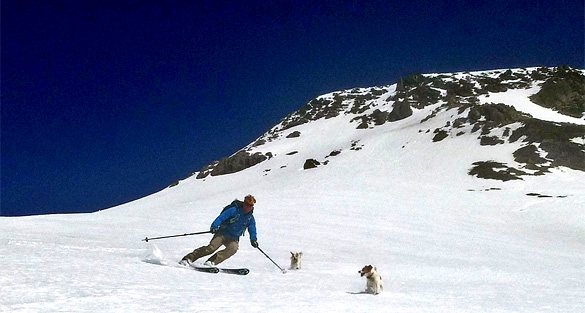 When it's spring snow that isn't deep, as above, they run along with us, always keeping out of the way of our turns. After a three or four hour hike and ski down, it's back to the van and home for food and a well-deserved rest with the dogs usually lying amongst all our kit (below) in the spring sun. 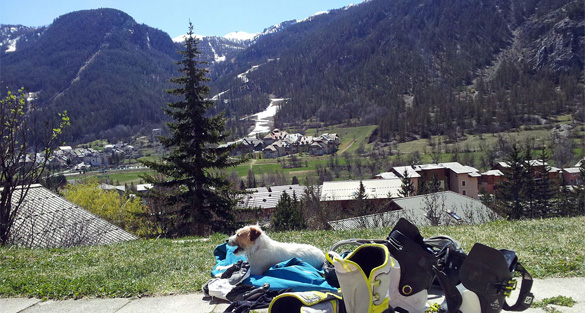 We've come across a few other dogs skii touring in the mountains. We've seen a German Shepherd actually attached to his owner via a harness, giving him an extra tow up. Also, several Border Collies with unlimited energy but, sometimes, less able to cope in deep snow as they tend to bound through it rather than follow tracks.

Watch the video: Sun Dog, The Happiest Dog On Earth. This dog uses up so much energy in the deep snow - but the filming of a skier doing backcountry with his dog is glorious. You never doubt this powder hound's love of the snow.

We don't tend to take the Jacks backcountry on deep powder days in mid winter when it's also freezing cold. But  sometimes, when it's a sunny day and there's fresh snow we will all go for a short tour. Last winter, we did the Terre Rouge route on the way to Col d'Izoard on a bluebird day in February. Gavin took an empty backpack and popped Beanie in it for the start of the descent which was steep deep powder, as she is younger and not as strong as Kiki. We'd never put her in a backpack before but she was incredibly chilled , enjoying the ride down before Gavin let her loose in the gully below for the mile long run out. 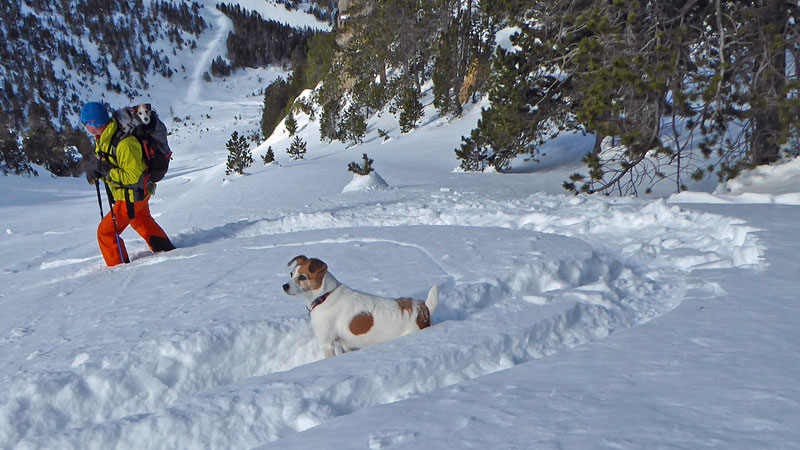 Sometimes, in the spring, the piercing whistle of a marmot will make the Jacks squeak with joy as they chase across the snow. But they haven't a hope of catching these crafty creatures. We were, once, chastised by a Belgium woman with a camera for not having our dogs on leads and, thus, saving the wildlife from their harassment. And it wasn't even a national park where, of course, if they were allowed to enter, we would have them leashed. It was the vast open backcountry. Clearly, she doesn't know how unfazed the wildlife is by two little Jacks. We were, actually, just returning from a ski tour with the dogs up Roche Robert where, as we stopped at the col to snack, a huge boquetin was eyeing up the Jacks with such an unhealthy interest that we hastened back down ie had to save the dogs from the wildlife rather than the other way round. 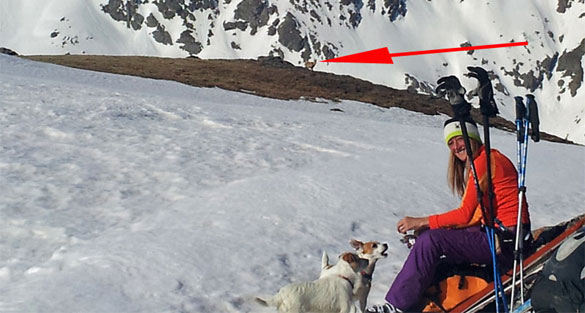 We have thought, what would happen if there was a slide and the dogs were buried? Should they wear transceivers so we could find them? But the consensus among other ski tourers with dogs is that, if we were all buried, then the rescue team might spend valuable time tracing the dogs'  transceiver signals. Of course, I would want them to save the dogs but not if it would delay them looking for people - and not just us but if others were caught, too.

Our first Jack, was a miniature with short legs called Pooch. What she lacked in stature she more than made up for in spirit and character. She loved nothing more than to be thrown into the deep powder on our patio - always coming back for more.

We, also, once took her up to a refuge in the spring snow, a three mile hike that didnt't bother her in the slightest. But we knew the pace would be too fast for her little legs and the snow would be too deep on the way down so, after lunch at the refuge, it was out with the Osprey backpack again so Gavin could ski with her back to the van. She made her appreciation known, barking all the way down as they flew passed other ski tourers and snow shoers. #thisdogcan ! 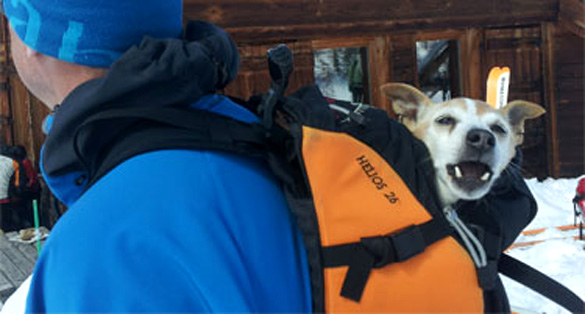 British Skeleton is handed a £1.7m funding cut for the next Winter Olympics cycle after failing to win a medal at the Beijing 2022 Games. click here for more

An investigation into teenage Russian figure skater Kamila Valieva has been completed, according to her country's anti-doping agency Rusada, with its findings due by early October. click here for more