HOW TO TURN THE WHITE ROOM INTO YOUR OFFICE. THE SEASONAIRE'S GUIDE TO WORKING IN THE MOUNTAINS 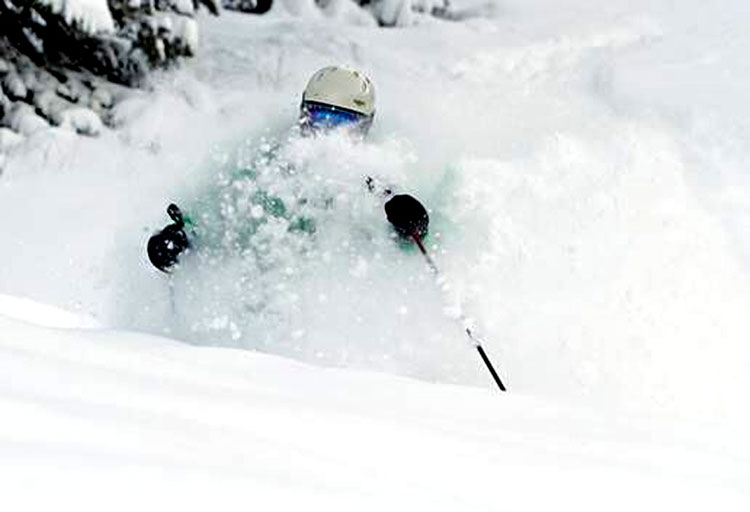 Instead of dreaming of living the mountain high life you could be living the dream. Meet the Seasonaires who just didn't want to go home - and figured out how to work full time in the mountains

Have you done a season or two - or three - in the mountains and now the mountains are not just calling, they won't shut up? Fed up of train commutes to the city and staring at the grey office building vista out of the window? Do you crave the high life, living and working in the mountains? Permanently? Well, don't just dream of living in the mountains, live the dream. Louise Hudson who, by the way, lives, works and skis in the US and Canada all winter by writing, talks to the Seasonaires, including April Thomas Whitney in the white room above, who stayed to carve out a career living in the mountains...

Take Jenevieve LeBlanc. She spent five years working at Lake Louise after college, intent on learning English (she is French Canadian) before enrolling into a criminology degree, and, more importantly, getting skier's gold: a free season's pass. Meeting Guy, who she calls a 'pure ski bum' – now her husband – she moved on to Whistler next.

'I then realized it would be hard to raise a family in this industry but wasn't ready to leave the mountain life forever. So, I sought higher education,' says Jen. Retreating to Montreal, she changed tack from criminology to a tourism management degree, hopefully the key to a 'proper' career in the mountains. In 2013, back living in Banff National Park her first priority was to get her 2 ½ year old son on a snowboard. The tourism qualification bore fruit with a job at SkiBig3 as a FAM coordinator (herding journalists and VIPs on Familiarization Tours) and now, at 32, she is Media & Marketing Supervisor for the company that encompasses the sister ski areas of Lake Louise, Sunshine Village and Mt Norquay. 'We as a family ride every weekend at all three resorts and eat snowboards for breakfast,' she says.

It wasn't an easy transition back to Banff from Montreal, though. Four years at UQAM (Université du Québec à Montréal), married and two babes in tow, meant that Jen and Guy were really established in the city, in a spacious house, surrounded by close family and friends. 'We had a bigger family and a richer life there but something was missing,' Jen explains. Mainly the mountain lifestyle. Now, with Guy also working in Canmore (just outside Banff), the family has settled into the regular Rockies routine of putting the kids into ski programs once a week in order to nab some quality couple's time 'shredding the goods', as Jen puts it.

It's expensive living in the Banff area, though. That is typically the problem for any Seasonaire who wants to get back to the mountains in a family format. 'The only way we could afford to ski as a family at all three resorts is because I work for SkiBig3,' Jen says. 'Otherwise we would probably have to decide to buy our season passes at just one of them. It's funny to hear our kids talk about the resorts and how to them it's just naturally their backyard. A big 8,000 acres backyard.'

Here are a few more examples of altitude advocates who have synced skiing with a permanent lifestyle...

Reasons – Gap year in 2006 from techie career in Silicon Valley, working as Teaching Assistant at the Children's Ski 7 Snowboard School, supervising everything from making tater tots to toilet trips.

How – Worked his way up through Ski School, from menial to management, launched a ski racing company, worked for the British Olympic Team and the Olympic Organizing Committee at Innsbruck 2012, applied for a Human Resources management position at Northstar.

'This journey has been one where I'm able to align who I am with what I do in an industry where I live my passion and do my best work.'

Reasons – Time out from a sales and recruitment career in Leeds.

How – Passion for snowboarding led him to search for wintersports careers. Using key word searches online, on job boards and on Seasonaire chat boards, he scoured the mountain market for any roles that had 'winter', 'ski', or 'snow' in them.

'I see Alpe d'Huez with rose tinted glasses, I'm sure. To me, it's one of the best resorts in France and has fantastic skiing, accommodation, restaurants and nightlife. I'm biased, but thousands of UK skiers each year can't be wrong so I'll bet that my memory of that resort 11 years ago is still valid as the best ski resort in France!'

Reasons – Hiatus from TV news reporting, ski bummed for a season, still there 13 years on.

Now - Communication Director for Brundage Mountain and Marketing Chair for the Chamber of Commerce.

How – Via ski instruction, through photography, implementing powder alerts and launching social media marketing for the resort, leading to full-time employment

'The mountains really pulled me out of a rat-race rut. As my career in TV news got more demanding, I began to crave more time on the mountain. I love the contrasts of skiing. How it activates all your senses at once and puts you in a state of excitement and calm at the same time.'

'I thought about what career I could do in the mountains and decided to go into Massage Therapy school. Best decision ever - being a massage therapist brought me the best opportunities ever for free skiing.'

Now – Lecturer in Financial Accounting and Leisure and Tourism, living in Vollèges, just five minutes from the Verbs lift station.

How - Did Masters in Leisure and Tourism to get a more lucrative job in the Alps, working first as manager for a luxury ski company, graduating to year-round employment for a Verbier entrepreneur, before moving into academia

'When I lived in Verbier it was all about village life, outdoor adventure shared during day, and very, very social evenings. We still buy season passes but time to ski seems to be less and less. I love nature, it has such a magical feeling. Exploring it and sharing it with others is amazing, especially with a partner and children.'

How – Worked for a golf resort which then purchased Arizona Snowbowl ski resort. Graduated from FAM trip leading and event organizing to Director of Marketing for Arizona Snowbowl in 1988. After a two-year gap while living in Guam, came back to become a ski instructor, also running the youth ski team

'I have been to several reunions at Arizona Snowbowl and have planned as many in my years on the mountain. I remain a devoted employee and enjoy my time at the area, spreading the passion that I have for the sport.'

Seasons – Starting out as dishwasher at the Hotel Edelweiss in Les Deux Alpes in 1984, he worked for UK tour operators for 15 years as an operations manager in Les Deux Alpes, Alpe d'Huez, Val d'Isère, Verbier, Chamonix and Méribel.

How – From working for CBS TV as Transport Manager at Albertville 92 and Lillehammer 94 Winter Olympic Games, moved into bar, restaurant and hotel management and then into teaching event and sport tourism management at Glion in 1998.

Seasons – Worked his way through Bachelor's Degree at University of Wisconsin, River Falls in the 70s by ski instructing all winter.

Reasons -  Making money in the mountains.

How – Worked at resorts in Montana, Utah, Idaho, Colorado, New Hampshire and New Zealand. From his early days as an instructor, he moved on to become a trainer, then an Examiner and Clinic leader for PSIA (Professional Snowsports Instructors of America), followed by assistant Ski School Director and then Director at various ski schools around the USA

'I think the most significant thing is how I have helped change other people's lives. Sure, I have had fun, and I love to ski the deep powder still, especially with my wife, but it's the profound differences I have made in people young and old. That is what skiing has done for me.'

HOW TO CARVE OUT A MOUNTAIN CAREER:

1) Some success comes about by accident and happenstance, but it is mostly down to passionate proactivity in grasping every opportunity to design your own downhill lifestyle.

2) Be prepared to radically change career tack. A degree in Tourism is more likely to get you work in resort than one in Criminology.

3) Clean up your Seasonaire act. Getting wasted at night and turning up bleary eyed for work the next day may not matter if you're only there for one winter but if you want to stay longer then reduce the bar crawl sessions for the sake of your job - and liver.

4) Using key word searches online, on job boards and on Seasonaire chat boards, scour the mountain market for any roles that have 'winter', 'ski', or 'snow' in them.

5) Follow a career that'll always be in demand in a ski resort, not just the obvious such as tourism or ski instructing but also, maybe, massaging or childcare.

6) Go from menial to management, learning the ropes and getting promoted OR by applying entrepreneural skills and starting a mountain-based business or service. Like doing powder, what could go wrong except maybe a fall or two?

7) It's NOT something you'll find on their CVs but one thing all of the above Seasonaires turned Year-Rounders share is joie de vivre. If you have an appreciation of being in like-minded company and a zest for both work and playtime (the lines between which are blurred) then the mountains are recruiting now...