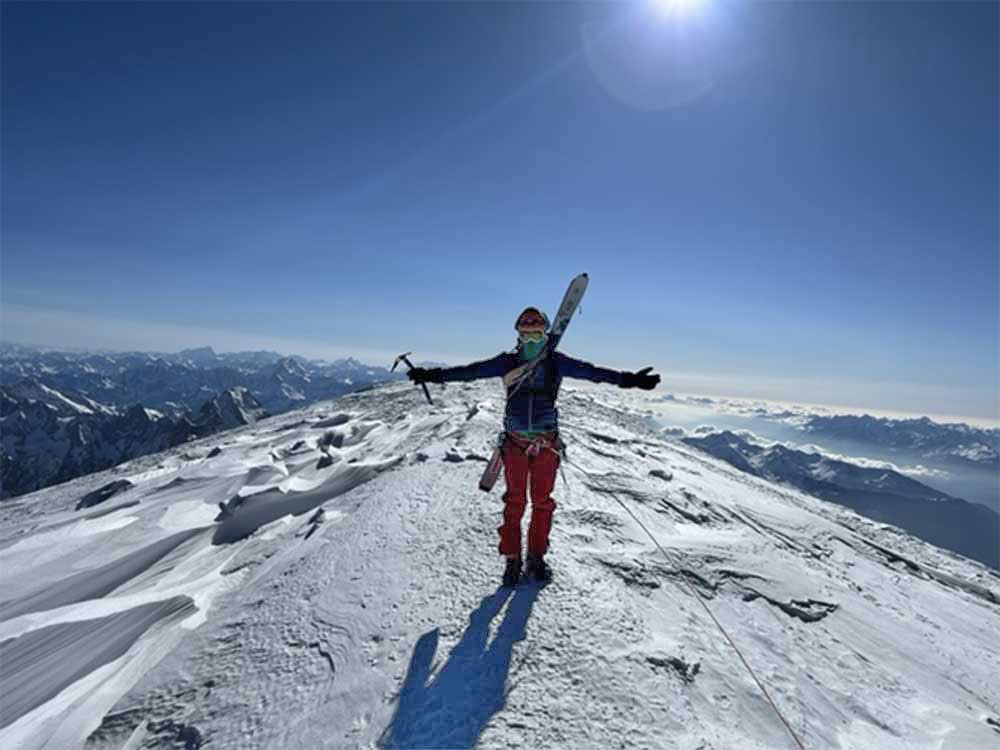 STYLE ALTITUDE Ski Editor, Jonathan 'Bing' Bingham, beat the weather, global warming AND Long Covid to climb up Mont Blanc and ski down the North face from the summit

Imagine watching the sun rise as you climb up Mont Blanc. Jonathan 'Bing' Bingham, our Ski Editor, did just this ascending to the 4807m summit - then clicking in to ski down.

Over 30,000 attempt Mont Blanc each year, summer and winter, with the first ever descent from the summit on skis recorded by Swiss guide, Elias Julen in 1930.  Significantly far fewer ski down as the window for the descent on skis is as narrow as an arrowslit: too early is a weather risk, too late and the snow can be dangerously mobile.

It takes timimg as well as backcountry skiing skills when the snowpack can change with every turn, slopes are up to 45 degrees, there are obvious (and not so obvious) crevasses and overhanging seracs.

So it was at 2.30am after a stormy week, that Bing set off on 28th April with his good friend, Andrea Di Donato, Mountain Guide, facing the triple challenges of conquering the summit via the North face, nailing the descent AND beating Long Covid.

How long has summiting and skiing down Mont Blanc been on your radar? Have you tried before?

I've been planning it for around five years, as much as you can plan these things. In reality it's not easy to get the snow conditions and weather to align for a summit and ski descent of the North face.

This was actually my third attempt!

What made 28th April the day you went for it? Can you describe the conditions?

It was very short notice (one day!) and if I am honest the conditions were poor up to then with a five day storm so I kinda wrote it off for another season.

The week before there were reports of navigation difficulties even to get to the Junction and crossing the Bossons on the way to the Grand Mulet hut. Reports from friends confirmed a few people had fallen into crevasses attempting the crossing the week prior.

What were the timings? How long did it take up and down?

We did it over two days. So the first day we approached from the Plan de l'Agille mid-station. From here you traverse west under the North face of the Aiguille du Midi keeping an eye out for serac falls from the Glacier Rond above. At the Junction we dropped down onto the flat section of the Glacier des Bossons and headed across to the slopes underneath the Dome Du Gouter, weaving our way through the maze of Crevasse to get to the Refuge des Grand Mulets where we spent the night. 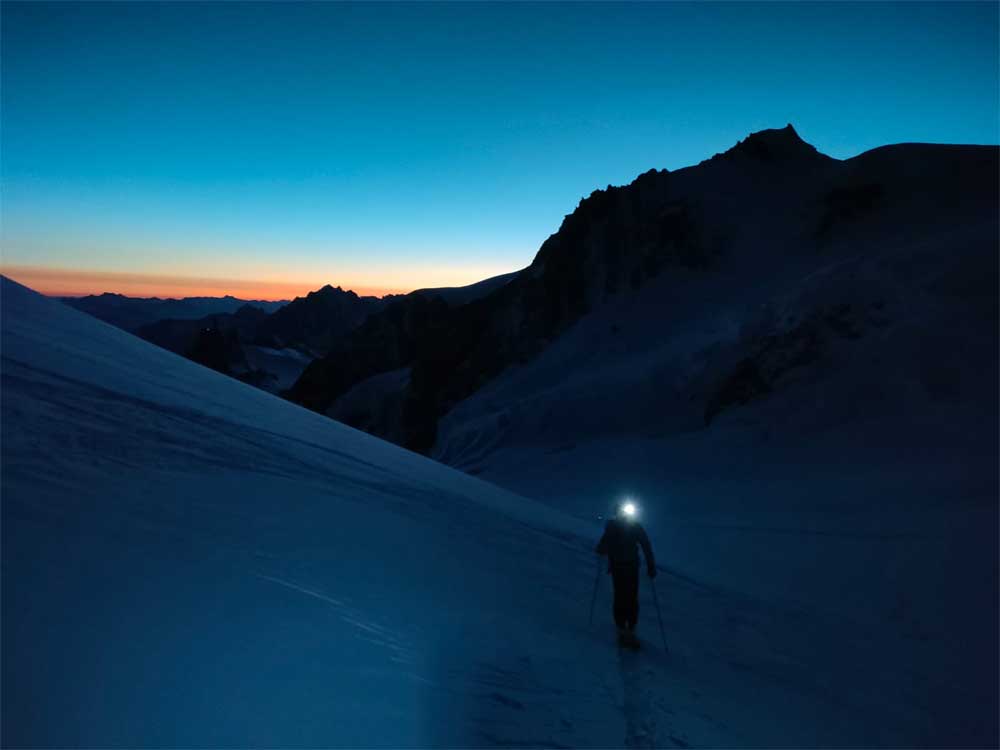 Summit day we set off at 2.30am to get away before everyone else and, also, to try and minimise our exposure to serac fall.The Grand Mulets route is becoming more and more threatened by seracs as you climb up to the plateau so it was head torch down and move as steady and efficiently as we could to avoid being under these seracs for too long.

Plan A was to take the Corridor route to the summit but due to the fact it was still super dark hindering navigation through the crevasses combined with issues of skin adhesion, we opted for the classic Gouter route passing the Vallon hut and then onto the Bosses ridge to the summit. 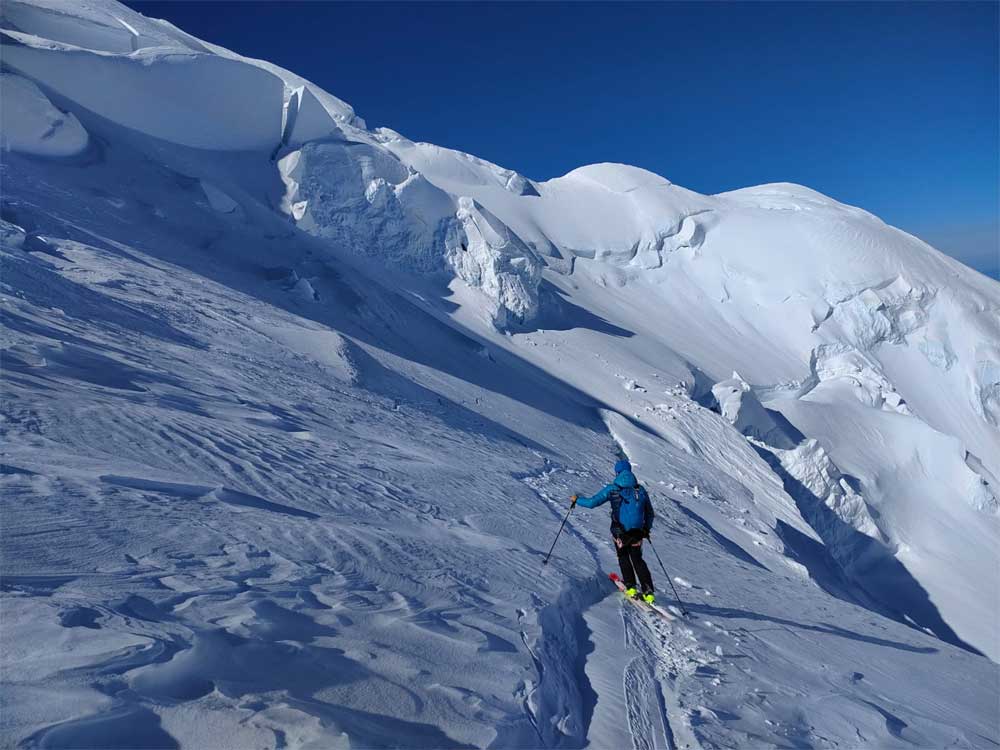 We were breaking track after the storm so it was hard going and the ridge. which I thought was simple (it's used in the summer as a classic route to the summit) was far from simple and, in fact, quite technical. My mountaineering experiences leading up to this really helped as we had to weave our way through ice sections plus deep fresh snow and the now-famous crevasses of the Bosses ridge, by a detour on the North face, I had to tuck myself inside a crevasse while Andrea broke this steep slope!

We summited at 9.30am and were back down in Chamonix at 4pm having a beer.

How was it skiing down?

Given it was super windy and cold we didn't hang around on the summit, a few quick pics and vids then skis on. As you know we were only half way there, now to get down safely! The skiing was not particularly difficult but the snow was changeable and we're in lightweight kit. we had to be super alert to our surroundings as conditions changed rapidly along with lots of exposure from above. 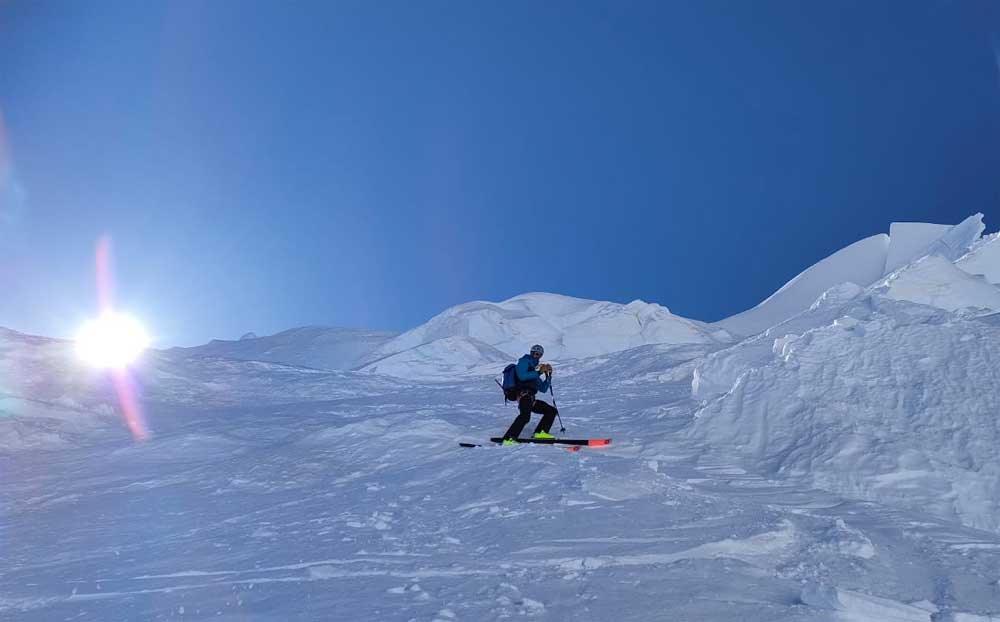 We moved as fast as we could until we reached a safe place!

Got to be summiting with my good friend Mountain Guide, Andrea. Also, it's been a tough couple of years for me suffering with Long Covid since I caught it in March 2020, so I wasn't sure how the body was going to hold up!

So how did it hold up?

With Long Covid, I've found that it's high intensity training like a three hour bike ride in the red zone, that my body still doesn't like! The doing is OK but it's the days after that I suffer with chest and throat followed by a wave of exhaustion. But climbing and skiing Mont Blanc was slow and steady, low intensity so, thankfully, it didn't seem to trigger any major side effects. Also, I'd spent a month in the mountains before doing Mont Blanc, boot-packing up 3000m couloirs to get physically prepared and acclimatised.

Maybe mountains and altitude is the best possible treatment!

But did it effect you after, were you tired?

I was too elated to feel tired. I was on a high!

How good a climber and skier to you have to be (with a Mountain Guide obviously)?

Mont Blanc is on a lot of people's bucket list and rightly so, The conditions are continuously changing on the mountain and so the skill level required can vary. But, if I am honest, I was a little surprised at the complexity of our ascent. 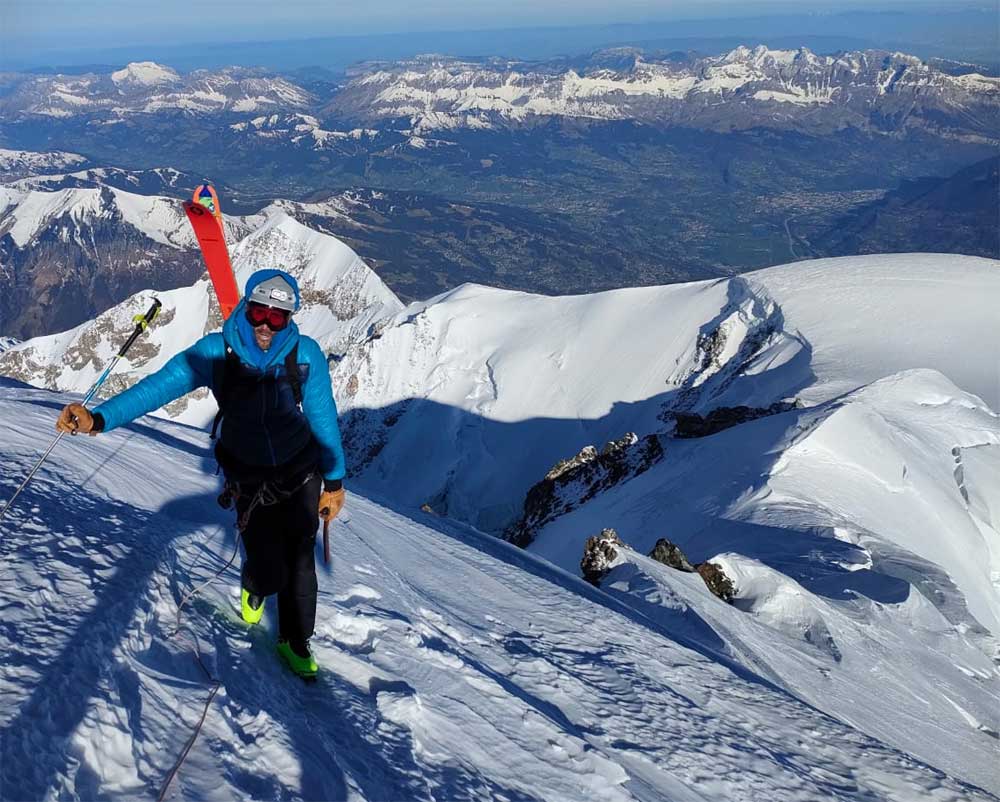 You should make sure you're fully prepared and have suitable skills, that you are efficient and comfortable with transitions from skis to crampons and using axes, not to mention being a solid skier. It's not a place you want to be hanging around looking for skis, I can tell you!

I would like to add that It's hard work enough for the guides with competent clients. They don't want to be putting their lives at further risk if you are not capable of handling yourself in the mountain conditions that you might encounter on the route. You need to be physically fit, for sure, as the ascent day sees you climbing over 2000m vertical metres - and at altitude. 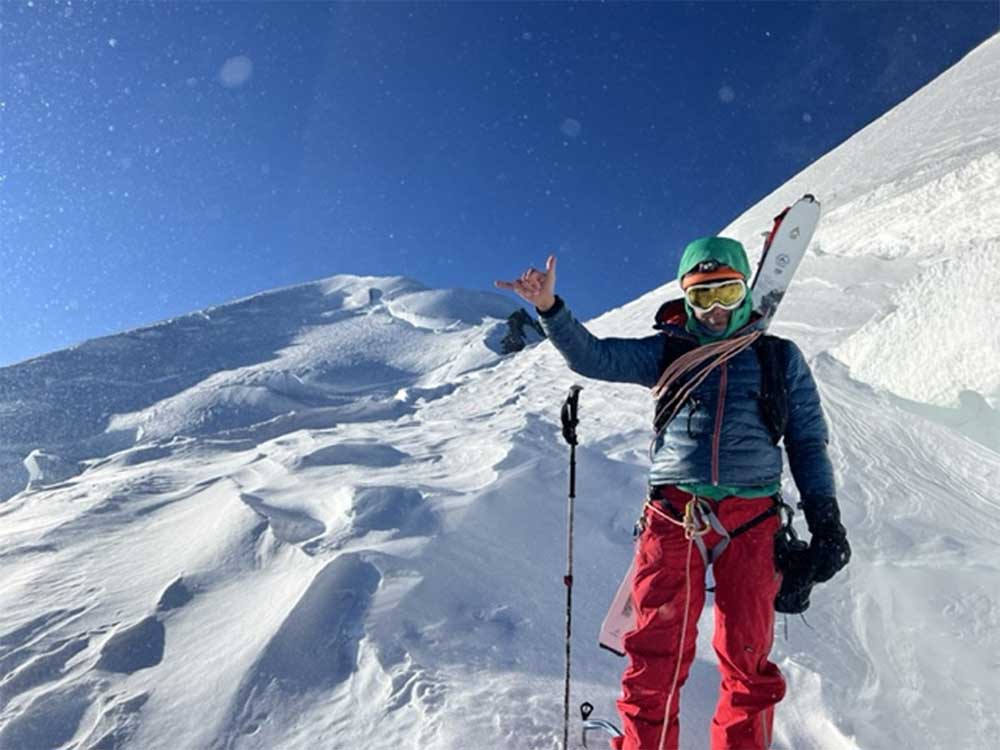 What thoughts re the effect of the climate on Mont Blanc and conditions for climbing/skiing?

It's going to get harder and more dangerous, for sure. I was kinda shocked how this beautiful and unique place is falling to pieces already and, after this (hot) summer, I hate to think what's gone on. Let's hope it is just a minor blip but I'm afraid that the damage has already been done!

What kit did you use?

What was in your backpack?

Nothing too exciting as we wanted to keep weight to a minimum, I wish I had packed a warm pair of mitts as it took months before I got the feeling back in the ends of my fingers!

Would you recommend it to others?

Defo! but be sure you're well prepared and aware of the risks!

Just happy looking forward to having a normal ski season without any Covid restrictions etc. Although rumour has it we might run out of energy to power the lifts...