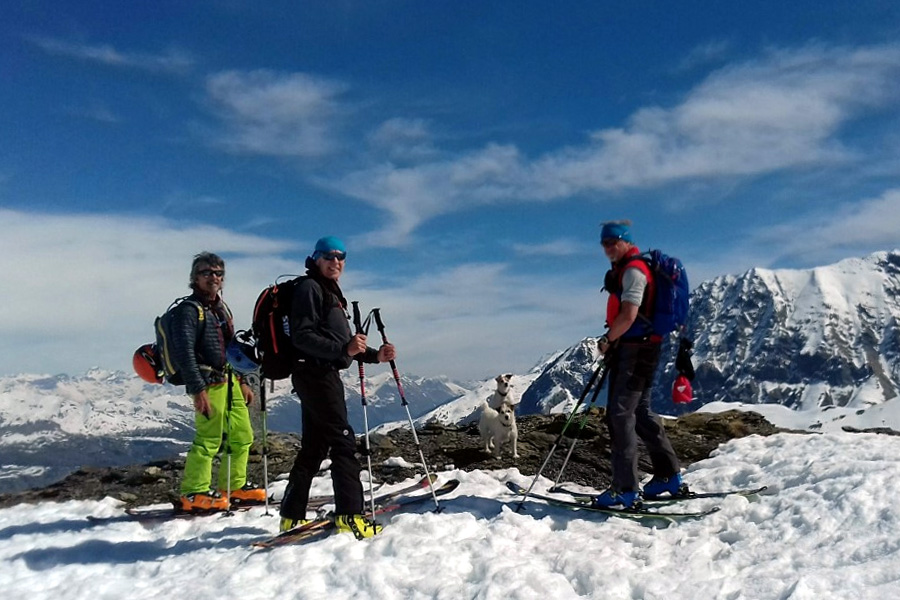 Climbing towards Crete de Dormillouise up from Cervieres near Col d'Izoard in April for easy 5 hour tour and spring snow skiing.

When the temperatures rise and the road opens higher it's possible to have a great tour and ski down without too much hiking to the ascent.

The alarm went off at 6.15am and I was still yawning when we met Ken and Kevin, yesterday, for a new ski tour up from Cervières at the foot of  Col d'Izoard climbing towards Crête de Dormillouse as, thanks to Gav's planning and an earlier recce via a walk with the Jacks, it looked like there was great ski touring up there.  And, as ever in April, temperatures were warming up so hence the early rise.

We drove as far as we could up from Cervières towards Les Fonds before there was too much snow on the road, parking the van at La Chau. It was then a 20 minute skin along the snow covered road past the village on the hill of Le Bourget and the little chapel until the ascent started. 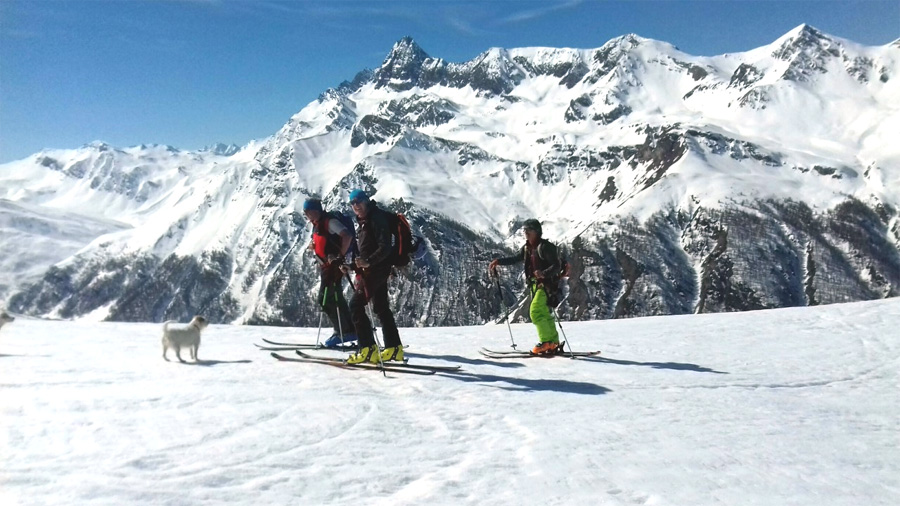 We were soon in a ski tour equivalent of Teletubby land and a rolling white landscape with an ever higher gradient beyond each climb.

It was a tad icy for the first hour so we all used crampons. We took a leisurely 3 hours 30mins up to 2650m with a couple of stops for water/snack/taking off layers. Gav went an extra 50m to scope out a potential ski down the south facing side towards Les Chalps where the snow had already turned to spring conditions which would mean skinning up again.

As ever the Rando Chiens did some extra mileage chasing the whistling marmots and even a couple of deer. So they wolfed their share of Pate en Croute for lunch. 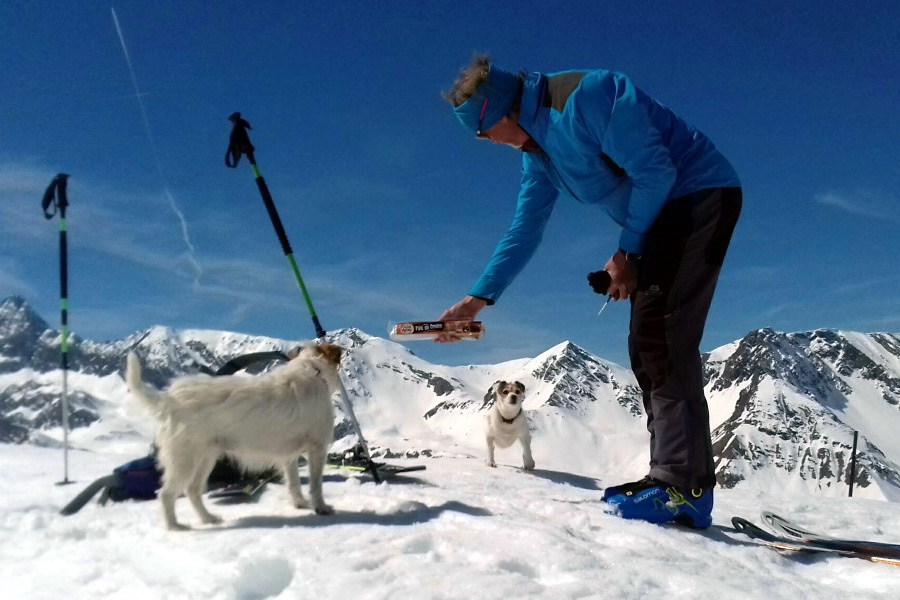 But some cloud was coming over so via walkie talkies we decided to leave it for another day (see postscript below!) and had a 20 minute rest at the France/Italy border stone post (see Ken sitting on it below) hoping the more WNW facing somewhat icier seeming slopes of the descent would turn more spring like and wondering why we got up so early! 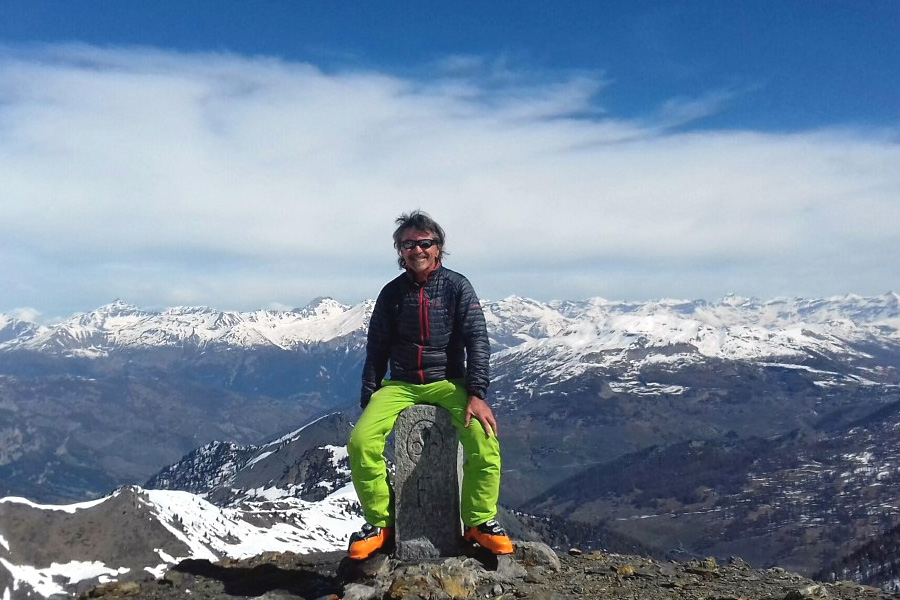 Once committed to going down we found almost perfect spring snow, although maybe a little harder at altitude and softening up to a bit of slush at the bottom. Then it was a cross country hike with heels free but no skins along the road and back to the van followed by the mandatory post-tour beer stop in Briancon.

It was a just under five hours from leaving the van to coming back including plenty of stops for snacks/kit changes/photos. A very good ski tour.

PS. We decided to go back to our new found valley three days later but this time climb further and higher along the ridge to the Cima Dormillouse peak topping out at 2908m.

Since we were there earlier in the week the snow had receded even more. The good news was that we could now drive further along the valley floor but the payback was that we had to climb further until we were able to put the skis on, not that the Rando Chiens complained as there seemed to be more marmots around.

It was a long climb and traverse and difficult to be sure which was the actual summit as there were a series of peaks. In the end the 'Cross' gave it away! See Gav's Strava link here. 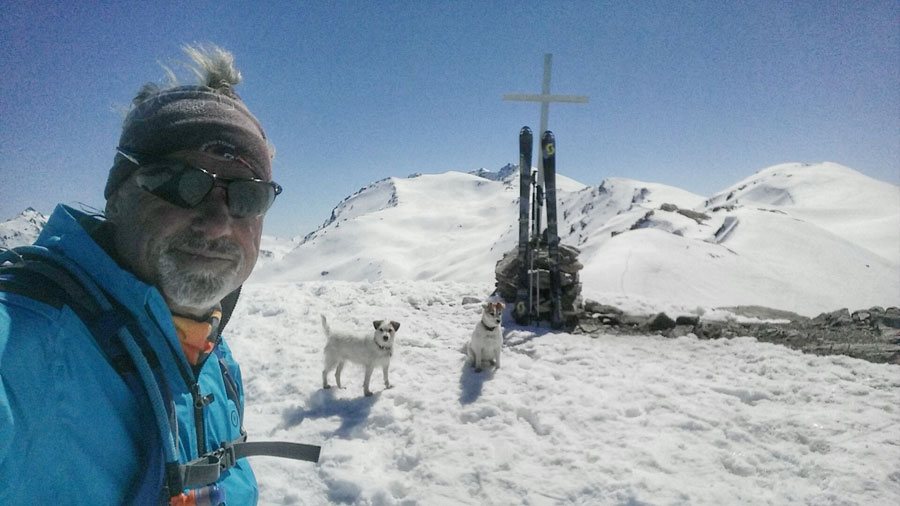