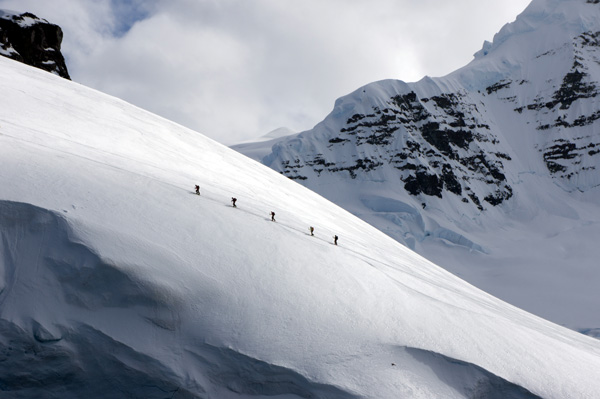 As in skiing, there are different levels of ability when it comes to ski touring. Ranging from Level 1 dipping a toe into touring - and, literally, into touring bindings - up to Level 4 experts who never buy a ski pass

Dipping a toe into ski touring, putting on skins and heading up more gentle gradients, even up the pistes if it is allowed in resort.

Or been doing it for years but have no wish to go steeper or higher than a couple of hours' climb. Go out with husband/wife, friends on members of the CAF/ski club. Always tour with a picnic packed for transition and maybe a bottle of wine. Only go out when the sun's shining and definitely prefer blue sky spring touring to cold winter days earning turns in powder.

Getting used to gliding the skis instead of stomping when going uphill. Average speed 200-400m per hour depending on how frequent the  breaks for refreshments and to enjoy the view. Rarely use crampons as never out in icy or super steep conditions. Learning kickturns but still prefer to shuffle around the bends.

Skiing down can be a bit of a challenge so ski touring with a guide or Level Four expert is advisable to find the best snow conditions to avoid a hellish or even a heli descent to hospital.

Touring gear is rarely brand new, often quite vintage, unless borrowed or hired. Wear a transceiver but how do you use it, again?

For determined novices, progress to Level Two can be swift, especially for those who are young and/or fit.

Ticked off those classic ski tours, the ones that say 'easy' on the touring guides. Starting to do some steeper and longer climbs. Need a mountain guide or Level Four ski tourer (see below) for safety in the backcountry and planning best routes up and down - although some Level Twos display natural ability to suss the conditions and navigate - or have an app of ski tour routes to do it for them.

Take a break every hour climbing or every 350m for refreshments/catch a breath and also when putting lifts up or down, especially if they are 'Dynafiddles'. Getting the hang of kickturns but nothing too steep or icy. Anything too strenuous or tricky then there is an urge to whinge (sometimes outloud) 'why am I doing this?'.

Usually (but not always) proficient on piste, confident on blacks and ventured off-piste into sidecountry so can ski down without incident unless it gets technical. However, descending in 'walk' mode is a potential fail having forgotten to switch to 'ski' during transition.

Borrowed a mate's ski touring boots (which were too big) for Level 1, now own a new pair but bought the same mate's skis (which they couldn't wait to off load as they are 5 years old and double the weight of their current touring skis). Also invested in the essential safety gear - and taken the time, even a lesson, to know how to use it.

How many ski tours on Strava, this winter? At least two a week but who's counting? Cafe skiing in resort is now a distant memory replaced with sipping black tea out of a thermos.

Able to do longer ascents with fewer rests. So upwards of 400m per hour. Kickturns are a breeze unless it's an arctic breeze making the snow icy and hard-packed in which case, thank goodness for crampons.

Still benefit from having a mountain guide or Level Four ski tourer (see below) to plan the route. Can ski down in most conditions although windblown crust and heavy snow may be a challenge.

Now have new touring skis, taking mate's advice about weighing up the advantages of lighter kit for climbing. Literally that is, weighing up skis on the bathroom scales. Often on wider touring skis, over 102mm, as climbing on wider skis is not an issue and skiing down in powder is just more enjoyable.

Never buy a ski pass unless it's a rando one to drop off the back. Ski touring in all weathers, in fact the gnarlier the better because no one else is going to be out there. Hence frequently breaking trail. So proficient climbing that hardly use crampons except for the iciest traverses and only put lifts up for serious steeps. Can ascend like a mountain goat never getting out of breath unless a ski mountaineer going over 3000m and attempting Mont Blanc without oxygen.

Ski touring speeds upwards of 500m per hour unless a skimo, in which case over 1000m, easy.

Able to make educated decisions about snowpack and read the terrain, calculating angles and aspects for the safest and best routes. Can ski down in all conditions, even kickturn DOWN the hill to get out of trouble.