Snow forecasts; The Lord giveth and the Lord certainly taketh away

Ok be warned this is probably a rant, so should it really be a blog as opposed to a feature?

As I started typing this so the snow was starting to fall, and the predicted dump lasted for all of 90 minutes!

My weather heckles were initially raised when a friend sent me a link to WePowder (image above) after we had seen a few predicted early season snowfalls already fail to materialise, and the one WePowder were highlighting seemed like more of the same.

I've been taking a very active interest in weather well before the Internet surfaced, as an active UK windsurfer our only really reliable source of wind forecast was the Inshore and Offshore Shipping Forecast on Radio 4 at 17:50 along with BBC TV forecasts.

Then with the spluttering of 14.4 modems, other sources of weather information started to appear, and I, too, joined the Internet running one of the first live weather reporting site incorporating up-to-the-minute live weather data (wind speed and direction) as well as a webcam from our house overlooking Worthing beach, on the UK South Coast; in fact sounding like a scratched record, I'm pretty sure I came up with the phrase, WeatherCam. And the site is still running after various changes to anemometers, webcams and not least properties over the years!

What became very apparent was how wrong the forecasts were in relation to what was actually happening. This was in no part due to the microclimate* surrounding Worthing, where in the summer sea breezes are prevalent, (aka The Worthing Effect) and way back the forecast models were unable to predict them. Hence, the popularity of a site where actual live weather data was published, along with a local prediction of what might happen on the day. In fact it was a blog before even that phrase was used :)

Since then the prevalence of sports weather sites predicting wind, snow and the like have multiplied over the years, and gone are the days when one looked at the synoptic charts and tried to second guess what might happen, though back in the 90s a few La Grave guides used to actually think I knew what I was talking about and asked me for predictions, and sometimes, more by luck than judgement, I got it right :) 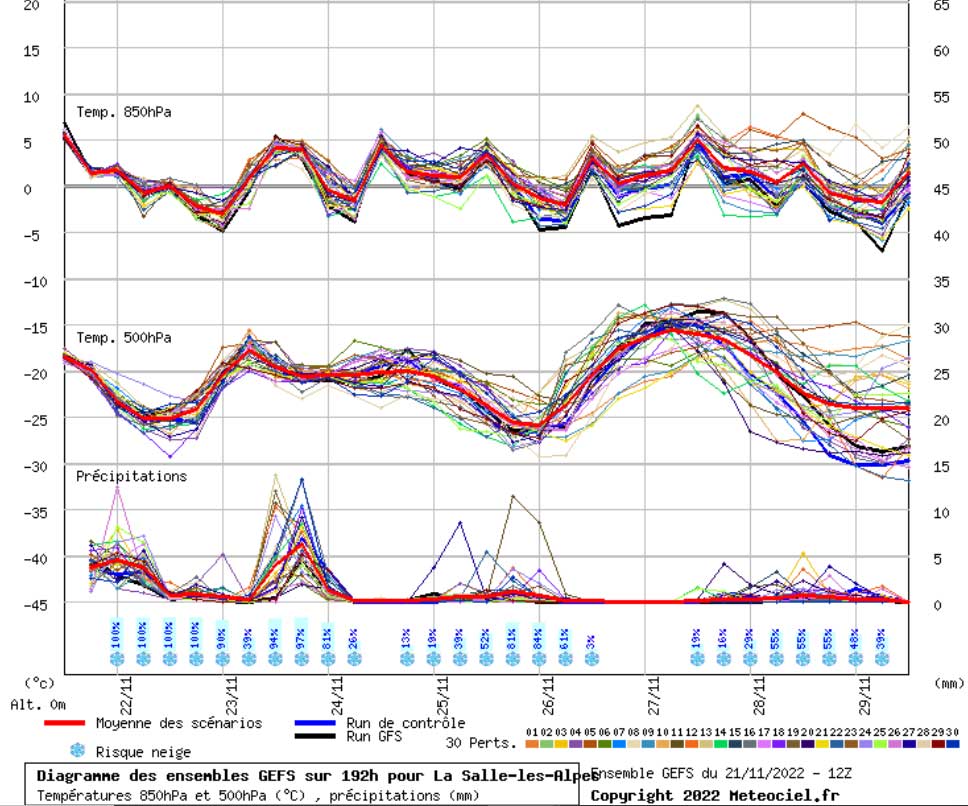 What has not changed over the years is that weather is generated by weather systems and these come and go within the space of hours, let alone days or weeks, and if they track 50km North, South etc that will drastically affect the forecast. That said Atlantic Low Pressure systems and the wind that they generate are far easier to predict than what the snow accumulation might be in a specific ski resort.

The Internet is full or forums with amateur meteorologists, many pretending to be scientific and attempt to interpret GFS (squiggly lines) Ensembles, being almost condescending to those who just like using sites with an easy to use interface, easy to read icons and data, summarised in a clean webpage, with drop down menus letting you view other ski resorts and weather maps with the click of a mouse, or drag of a finger.

So fast forward to last week when I was looking, as ever, at the probability of snow here in the valley in Serre Chevalier, where we live at 1,400m. Using a combination of the above squiggly lines, and a cross section of four weather sites, Meteociel, Snowforecast, Yr.no and PistePro there did look like something was on the cards as the weather was looking far more unsettled, and there was the very real prospect, finally, of snow in the valley. Bear in mind we have arrived at a similar time in November in the past 10 years, in advance of the lifts opening, as we put our skins on the skis and tour up the empty resort and further afield, and have had some great sorties.

In advance of a mate sending me the WePowder forecast, I had already started screen grabbing the the YR forecast as I just had that feeling of here we go again, and I think the first time I looked there was well over 45cm forecast. Then when I started to have my doubts it was the 18th, just as WePowder announced "Chances for a dump in the Southern Alps", and I started screen grabbing the relevant forecasts.

Currently I'm looking at around 2cm on the terrace, and doubt we'll see much more than 5cms in the next 12 hours.

If you're observant, you'll also see that Meteociel tried to get us excited for the back end of this week, with nigh on 30cms but that went as quickly as it came! 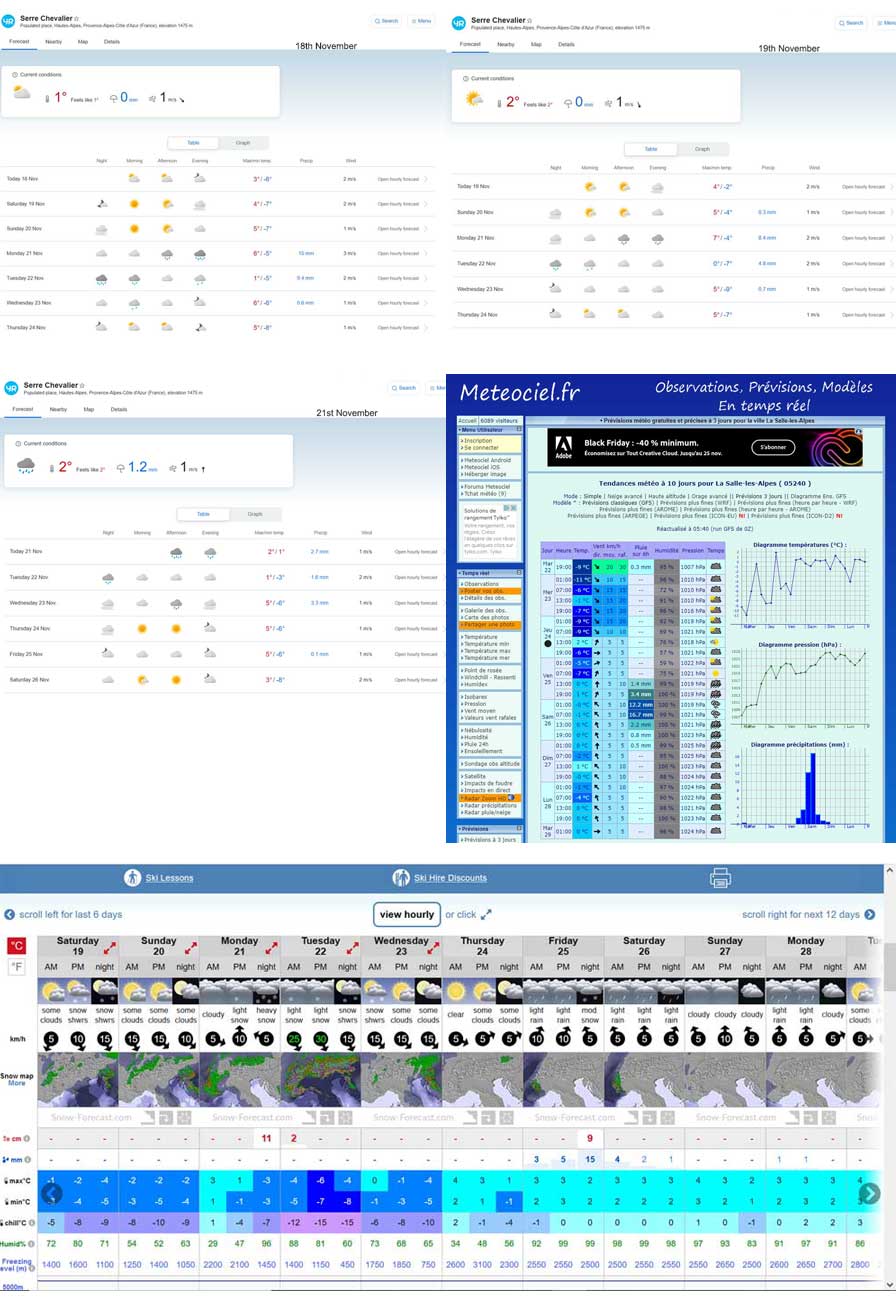 So, yes, maybe a feeling of sour grapes, not helped by the disastrous past 21/22 season where, after December, we never saw snowfalls amounting to more than 10cm or the couple of days that did deliver substantial accumulations in March saw the snow quickly disappear by lunchtime. And to put that all into perspective, the valley floor cross country pistes closed after the February holidays and never opened again for the season!

So please take long range forecasts with a tremendous pinch of salt, and even more so the commentaries made by well-meaning people, who while they might be experts at reading squiggly lines know in their heart of hearts that maybe you're just better off sticking your head out of the window :)

*Microclimates - and there's another element that forecasts can't take into account here in the mountains, where there are so many local vagaries, such as geographic features like the Col du Lautaret that affect weather patterns; though the High Resolution forecast models used by the likes of the UK Met Office can now capture the nuances of summer sea breezes, but I think we're a long way off predicting the effects of the Retour d'Est in the Queyras where from one valley to the next the difference in snow fall is truly staggering.